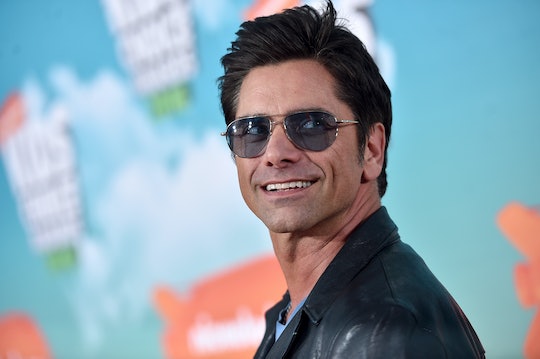 John Stamos Is Going To Be A Dad, & His Announcement Is *So* Uncle Jesse

It took a little longer than expected, but Uncle Jesse's house is finally going to be full. John Stamos is going to be a dad, People has reported, and he's already got the corny jokes down pat: "I'll be a fun dad," the actor predicted. "I've been practicing for a long time." No word yet on whether the baby's room will be wallpapered in pink bunnies. "People would say, 'You should have a child,'" Stamos said, and he "always wanted to be a dad," but he worried that it was too late. That's just one of the many perks about being a dude, though; technically it's never too late.

Stamos proposed to his fiancée, Caitlin McHugh, in October, but in People's cover story, he revealed that the baby was already on the way by then. "We have the same morals and the same values, that all clicked nicely. So we said, 'Oh, well, maybe we should have a family.'" McHugh wanted to start trying before marriage, saying to Stamos, "Because you're old." Stamos is 54, and his fiancée is 31. "The look on John's face when I told him we were pregnant was priceless," she told People. "It was the look of a man who has wanted a family of his own but wasn't sure it was going to happen for him. Now it is!"

Once he heard the news, Stamos told People, "I said, I better have a ring on her finger because it's the right thing to do, and I wanted to marry her anyway. So I called her parents to ask, and it was like, 'You better!'" The sometimes-Beach Boy popped the question at Disneyland in October, People previously reported, at the conclusion of a custom-made montage of "romantic" scenes from children's movies. McHugh is a certified Disney fanatic, so the proposal was right up her alley.

Stamos' TV family has vetted McHugh and given their stamp of approval; Lori Loughlin, who has played his on-screen wife since 1991 (don't mind the 21-year gap) told People that she requires "a full bio and a picture" whenever he brings a new partner around. "And then I approve everyone that he goes out with — and if I say no, he can't go out with them!" That's par for the course, Jodie Sweetin confirmed to the magazine: "I remember I told my fiancé, 'Just so you know, you'll have to meet my family, and then you'll have to meet my Full House family. And I'm not sure which is going to be tougher!'"

Stamos spent the better part of his 20s pretending to raise three nieces and twin sons on TV, but did that adequately prepare him for having his own child, full time? Candace Cameron Bure, the eldest of his part-time charges, told People that Stamos is "the best with little babies and little kids," and in 2015, before he even met McHugh, Stamos told Us Weekly that he wanted a baby so bad, "My ovaries are rattling." Here's hoping that McHugh is in charge of teaching their kid about the birds and the bees.

Things finally started coming together in 2017, though; Stamos shared with Entertainment Tonight last month that having children has "always been my plan; it's just taken me a lot longer than I anticipated." Luckily, he had the luxury of waiting until "the perfect woman" came along. "He's always been wonderful with kids," McHugh told People. "I'm sure he will be an amazing father." But more importantly, a dad's primary responsibility is making corny jokes; considering Stamos' three decades of practice, he should have no trouble adjusting to his new role.