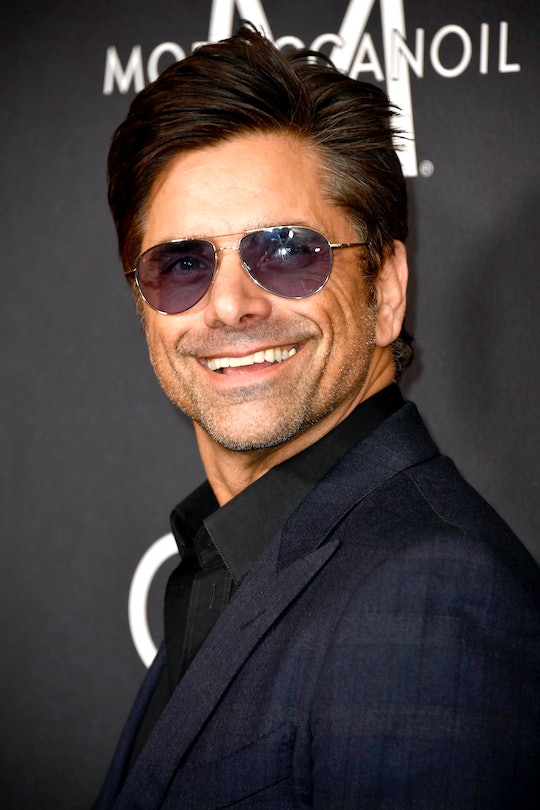 He's always been the cool uncle and, now, the cool dad. When Full House star John Stamos became a papa for the first time last year, the TV star and rocker was over the moon. While I suspected this star would be a blast as a parent (he did propose at Disneyland, after all), in case anyone had fears he'd lose his sense of fun, John Stamos and son Billy dressed up like Elvis and we're all shook up about it.

As USA Today reported, Stamos celebrated son Billy's first birthday in the best way he knew how — by doing a dad-son Elvis Presley impersonation, which Stamos posted on Instagram to the delight of fans.

"One year ago tonight, our little King was born," the actor wrote next to the adorable pic, which features dual white jumpsuits with beading or sparkles, a belt for dad, and a red scarf for baby. Both guys have a rock-star 'tude and are looking straight at the camera.

Reactions were good... especially from Stamos' extended "family" of Full House and Fuller House stars, with whom his social media shows him to be extremely tight.

"Happy birthday Billy!!!! What a great pic," replied Candace Cameron Bure, who joined Dave Coulier and Bob Saget in chiming in with their best wishes, in addition to other fans. (Billy's mom, Caitlin McHugh commented too: "🎶 for my darling, i love you, and i always will 🎶.")

As Good Morning America noted, Stamos' TV character had a love for the King of Rock 'n Roll (or maybe Stamos' love of music affected his character and it was really the other way around?).

Really, this adorable whimsy as a parent on Stamos' part should come as no surprise. Stamos and McHugh were engaged in 2017 according to Entertainment Tonight and have posted frequently about their love of the Magic Kingdom, and their excitement at sharing the fantasy of the place with their own family.

Funnily enough, since children will actually have their own opinions, People reported that little Billy Stamos have have his own favorite brand... and it's not Disney.

"As much as we push Disney on the poor little guy, he loves Curious George. So we’re going to have a Curious George party,” Stamos told the magazine at an Oscar event in L.A. in advance of his little one's April 10 big day.

And while recent coverage clearly shows that this is a sweet time in the actor's life, the performer has also needed the help of his cast-mates to change his life around.

As Good Housekeeping reported, Stamos turned to cast-mate Jodie Sweetin, herself open about her addiction and subsequent recovery, after a DUI.

"Thank god, my wife and my new son will only know me as a sober husband and father,” Variety quoted Stamos as saying at a recent awards ceremony honoring Sweetin's advocacy for those in recovery. "This is Jodie’s legacy in my life."

Aww. Not only is it nice to see Stamos' happy ending, it's also great to hear good news about the Full House bunch that doesn't involve the actors being asked about the college admissions scandal. After all they, each have their own lives to lead. Particularly if it involves daddies and babies as cute as John and Billy, and any form of dress-up.

Because this is what the world needs more of right now, don't you think?

More Like This
John Mulaney Teaches His Son To Say "Ahh" After Drinking Water In A Super Cute Video
Nick Cannon Announced The Birth Of His 9th Child, A Daughter Named Onyx
Kanye West Apologizes To Kim Kardashian For The Stress He Caused The Mother Of His Children
Ryan Reynolds Joked About Wanting To Duct Tape An iPad To His Kids' Faces