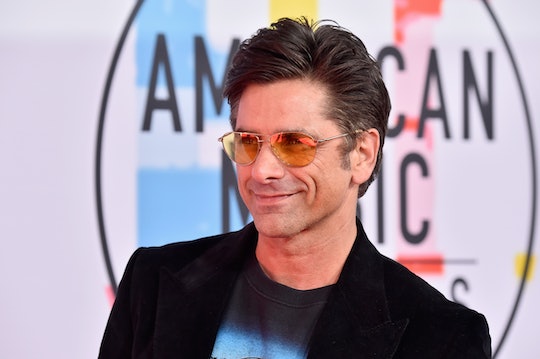 The internet can be a harsh, scary place and many parents are anxious about their kids diving into life online. Celebrities know firsthand how horrible it can be; there are trolls everywhere, just waiting to dole out unsolicited opinions and nasty comments. As such, many choose to shield their kids from the public eye and keep them off social media. And, as it turns out, John Stamos worries about protecting his son Billy for this very reason.

The Fuller House star recently chatted with Entertainment Tonight and revealed that, like many parents, he worries about 1-year-old Billy growing up and, more specifically, being on social media. Stamos shared that his experiences with platforms like Twitter and Instagram make him "want to protect" his baby boy and recalled an eye-opening dinner with his family, including his niece.

Throughout dinner, the young girl was on her phone, as young people often are, and as Stamos told Entertainment Tonight, everything was fine, until it wasn't. "... In the middle of dinner, she starts crying because somebody said something on social media and that hatred comes into your home. It's no good," the 55-year-old actor told the outlet.

"You say [kids can do] whatever they want to do. I'll tell you one thing — I don't know how yet, but the social media with kids [makes me want to protect Billy]," Stamos went on to tell Entertainment Tonight.

Stamos isn't wrong about worrying about the realities of online bullying. It's a prevalent issue for everyone and children are especially susceptible. In fact, the nonprofit Enough Is Enough found that almost half (47 percent) of all young people have received intimidating, threatening, or just plain mean messages online. An despite the threat of cyberbullying, Enough Is Enough says that children and young people are spending more time on social media than ever and are using multiple platforms.

Stamos speaking out about his fears and concerns surely helps bring awareness to this issue, and many celebrities have taken a stand against bullies, such as Curt Shilling and Ashley Judd, according to HuffPost. Judd even pressed charges against online trolls in 2015, according to CNN, which seemed extreme to some but could be the answer to stopping that kind of behavior in its tracks. If bullies understood that there were repercussions for their actions — be it sending a hateful tweet or harassing someone on Instagram with mean, hurtful comments — they'd likely think twice before hitting send.

The internet doesn't have to be anxiety-inducing for parents. As StopBullying.gov of the U.S. Department of Health and Human Services recommends, taking simple steps like talking to your kids about bullying and defining it in terms they can understand can help keep kids safe online. This can help kids avoid being mean online, and teach them how to spot bullying when they see it. It can also help set children up for responsible online behavior, which is really all parents can hope for from their kids when it comes to their internet use.

Billy has a few years to go until his mom and dad are faced with this teaching him these lessons, but Stamos' recent revelation goes to show celebrity parents go through many of the same struggles as the rest of us do.