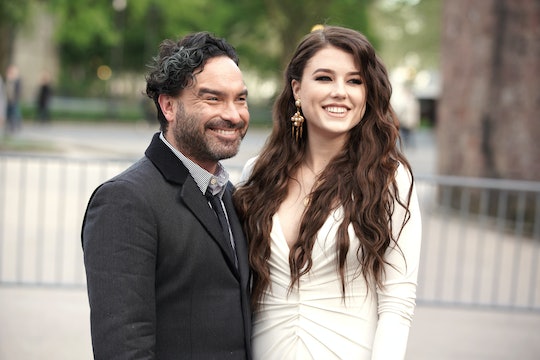 Fans of The Bing Bang Theory are probably still reeling from the series finale in mid-May. And also wondering: What now? Because the nerd culture phenomenon has remained incredibly popular through the years — and across several generations of viewers. Even though the show has officially ended its 12-year run, Johnny Galecki (AKA Leonard) is still managing to make headlines. That's because he'll soon be welcoming a baby with his girlfriend Alaina Meyer. Yep, it's the beginning of a new era for the actor. And Johnny Galecki's gender reveal for his first child shows how excited he is to become a father.

Galecki, 44, and his girlfriend Alaina Meyer, 22, started dating sometime during summer 2018, according to People. It was on May 3 that the couple announced they were expecting their first child, ET Online reported. "We are absolutely over the moon to announce that we will soon be welcoming a little one into this crazy and wonderful world," the actor wrote on Instagram, alongside a photo of the parents-to-be . "We ask that you please respect our privacy during this celebratory time for us and our families. There truly is love out there for all. We hope ours is the ember of yours, as we feel yours is the ember of ours."

As Today reported, both Galecki and Meyer took to Instagram on Sunday evening, May 26, to share another tidbit of exciting news: They're having a baby boy! It turns out the expecting parents gathered with friends and family for a sex reveal party. “A day I’ll never forget,” Galecki captioned a photo of himself and Meyer covered in blue paint after the reveal.

The mom-to-be shared a similar photo on herself and Galecki via Instagram on Sunday, writing, "I can not wait to raise a baby boy with my love. He will follow in his fathers footsteps of being a generous, loving, chivalrous fellow 💙."

In case you're wondering, the party looked fabulous. It was an outdoor affair — complete with blue- and pink-frosted cupcakes, according to Meyer's Instagram Story.

As well as some beautiful balloon arrangements.

When it come down to the reveal itself, things got a bit messy. That's because balloons filled with blue paint were popped over a canvas. Take a look.

Another tidbit of information fans learned from Meyer's Instagram Story? The name of their baby boy! Unless they change their minds before their son arrives, the moniker Galecki and Meyer chose is Avery Stryker Galecki. (Too cute, right?)

On May 10 — during an appearance on The Talk — Galecki wore bright pink nails, which elicited some questions, People reported. As it turns out, the actor was secretly hoping for a baby girl. “I get a little bored looking exactly the same way for nine and a half months every year playing Leonard,” he explained. “So we wrapped and I threw some blue in my hair, then I got superstitious that I was manifesting a boy, when I kind of prefer a girl. Don’t play this tape for my child years from now! I painted my nails pink to try to even out the energy there."

It's worth noting Galecki added the baby's health was the most important thing. Which was a nice save, considering his hair turned out to be correct after all. Congrats, again, to Galecki and Meyer on their little one on the way!