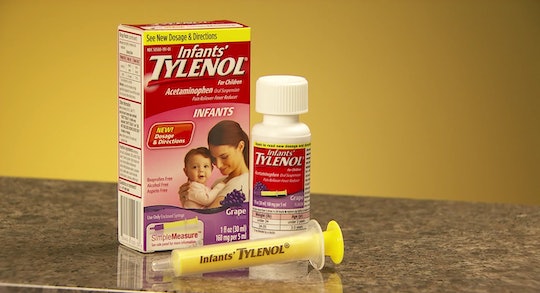 You May Be Entitled To Money From The $6.3 Million Infants' Tylenol Settlement

A proposed settlement has been reached in a class action lawsuit filed against Johnson & Johnson in February 2019, according to Fast Company. The lawsuit alleged Johnson & Johnson used strategic packaging — specifically, a picture of a woman holding a baby and the word "infants" — to deceive consumers into believing its Infants' Tylenol was a different or unique product despite it containing the same concentration of liquid acetaminophen as the company's Children's Tylenol product.

Although Johnson & Johnson has agreed to a settlement of $6.3 million, the company has continued to deny all allegations of deception and maintains the safety and dosage features of its Infants' Tylenol make it a different product than Children's Tylenol.

"Infants' Tylenol comes with an accompanying syringe for safe dosing of very young children and is therefore a different product from Children's Tylenol," a spokesperson for Johnson & Johnson tells Romper. "This matter has nothing to do with the safety, efficacy, or quality of Infants' or Children's Tylenol. Tylenol is the number 1 pediatrician recommended brand for pain reliever and fever reducer, relied on by families for more than 60 years."

As part of the proposed settlement, however, Johnson & Johnson has agreed to modify Infants' Tylenol packaging and commit to educating and informing consumers to the fact that both medicines contain the same concentration of liquid acetaminophen.

To submit a claim for settlement payment you must have purchased at least one bottle of Infants' Tylenol for personal use between Oct. 3, 2014 and Jan. 6, 2020. Each claimant will receive $2.15 for every 1 and 2 fluid ounce bottle they purchased. While claimants with proof of purchase can claim an unlimited number of bottles, claimants unable to provide proof of purchase can claim a maximum of seven bottles, or $15.05.

All claims must be submitted through this online claim form by April 13, 2020.

More Like This
How To Get Boogers Out Of A Baby's Nose
Can You Mix Breast Milk & Formula? Experts Weigh In
Here’s Your Guide To Paced Bottle Feeding
Are You Leaking Amniotic Fluid Or Is It Normal Discharge? Experts Explain