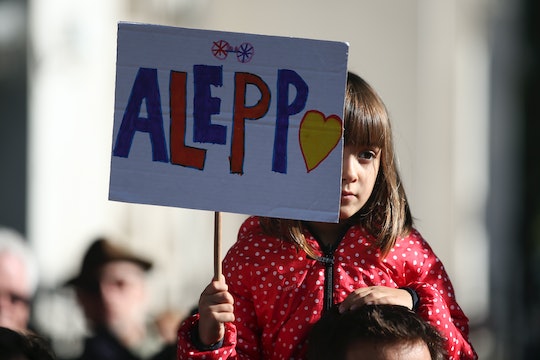 Never underestimate the power of moms to change the world. A chance connection on social media with a heroic doctor on the front lines in Aleppo opened two American mothers' eyes to the unimaginable suffering and destruction being inflicted on the Syrian people every day. Now they're using social media to bring attention to the ongoing war and the hundreds of thousands of innocents in harm's way, and the heroes, like Dr. Omar, a 30-year-old neurosurgeon, who has vowed to stay and help as long as he can. Join these moms and a Syrian doctor who are trying to help Aleppo's victims in any way they can.

It started with Wendy Widom, a social media manager at CBS2 in Chicago, according to TODAY. She shared a story about a Chicago doctor born in Syria named Dr. Zaher Sahloul, who was able to smuggle a lifesaving piece of equipment into Syria for a neurosurgeon. When Widom noticed someone named "Omar" liked the post, she went to his page to find out more. It turned out Omar was the doctor in Syria using the machine Sahloul snuck into Syria. So the mother from Chicago and the doctor in the midst of a war zone became unlikely friends.

Widom, joined by her friend Becky Carroll, began writing to Omar frequently to try and offer him a little lift here and there.

“Wendy and I try hard to keep his spirits up, keep him positive, and talk about things that can get his head out of his day-to-day so he has some sense of normalcy," said Carroll, who is the mother of a 2-year-old daughter, according to TODAY.

Omar, who doesn't want his last name released because of safety and security reasons, is one of only 30 doctors left in Aleppo to treat the 270,000 people still trapped in the city, TODAY reported. The situation is increasingly dire. Especially for children. According the Telegraph, which cited numbers from Amnesty International, there are about 100,000 children trapped in Aleppo under terrible conditions.

“No one has seen fruit in the markets for the last three months,” said Mohammed Abu Rajab, an X-ray technician who was helping Omran Daqneesh, the little boy photographed bloodied and in shock in the back of an ambulance, according to The Telegraph. “Potatoes don’t seem to exist and the vegetables that are available are very expensive. Many people don’t have work and I don’t know how they eat.”

After hearing about the horrors on the ground in Aleppo from Omar, his two mom pen pals wanted to do more to help. Widom, a social media professional, did what came naturally and started tweeting with the hashtag #StandWithAleppo to raise awareness of the catastrophic suffering in Syria, according to TODAY. The women also think their second hashtag, #AskAboutAleppo is the reason the two presidential candidates were asked about the conflict during the second presidential debate, TODAY reported.

"We just want to get people talking about it and reading about it," Carroll told The Chicago Tribune. "We want to keep it front and center, so the people aren't forgotten there. That's our hope."

So what's stopping the rest of us? Aleppo's children have suffered long enough. Tweet these hashtags, donate to organizations, demand our political leaders do more to send aid and end the conflict. American mothers need to stand up and speak out for the children in Aleppo who can't. And women like Widom and Carroll are leading the way.

According to the Chicago Tribune, more than 400 people have liked the #StandWithAleppo Facebook page, and the hashtag continues to stay in the mix on Twitter.

"If you are lucky in life you get to connect with a hero," Widom told TODAY. "Connecting with Omar and seeing his heroism—maybe we can bring a voice to what he and all the children are seeing."

It's time for America's moms to get in the fight. Do your part on social media and consider donating to help Aleppo's children through charities like the SAMS Foundation which supports health care professionals like Dr. Omar in Syria. There are plenty of other organizations you can support too, including UNICEF, which is on the ground in Syria and Save The Children, which helps more than 185 million children across 120 countries.