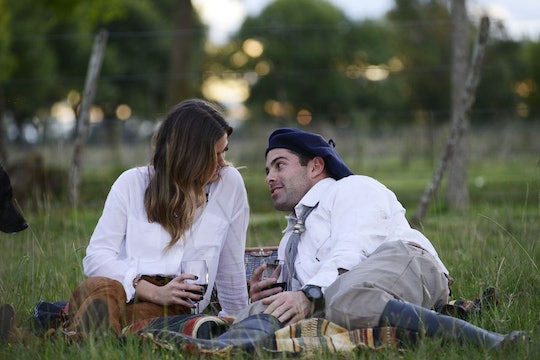 During their last week in Argentina, Alex's very first one-on-one date with JoJo turned out to be the U.S. Marine's last. After a somewhat awkward date on a ranch in the Argentinian countryside, JoJo sends Alex home on The Bachelorette in a total surprise move that hits Alex like a punch in the gut.

On their long drive out to a ranch, JoJo confessed (in a cutaway interview) that she was struggling with feeling romantically connected to Alex, even though she felt super comfortable with him. While their conversation flowed easily, their interaction was more like siblings playfully annoying each other with Pringles duck mouths (OK, so Alex was kind of steering that weird ship) than a hot, connected couple. This was an especially red flag considering the off-the-charts chemistry JoJo has with guys like Luke and Jordan. It was clear that Alex's romantic game was lacking.

The date activity itself didn't inspire much more romance, with Alex in traditional Argentinian gaucho garb, and the couple basically watching as a real gaucho subdued a horse enough for them to lay down and cuddle with it. Later, during their intimate dinner conversation, JoJo was caught by surprise when Alex told her he was falling in love with her. She had been waiting for him to be more expressive, but once he was, she confessed that she wished she felt more excited to hear it. (Ouch.)

JoJo is obviously uncomfortable with Alex's admission of love, though she expresses gratitude that he's finally opened up. In an effort to be as respectful as possible, JoJo decides to cut Alex mid-date since she can't reciprocate his feelings, even though, at this stage of the game, there are no roses to be given out on one-on-one dates anymore. So Alex knew he didn't have a guarantee of safety, but he clearly wasn't expecting to be sent home. As JoJo is walking Alex to the car, he avoids looking at her and is super shut down.

"My final memory with him is him not being able to look me in the eye? Like, that's not how I wanted to say goodbye to him," JoJo later says in a cutaway interview. "I don't know how to do this."

But, she promptly jets off on a one-on-one date with Jordan in wine country, so her frustration over Alex acting like a baby dissipated pretty quickly.