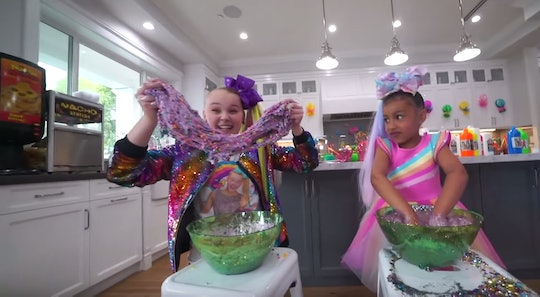 If you haven't heard of YouTuber JoJo Siwa, then allow me to "introduce" you. She's a 15-year-old dancer, singer, actor, and YouTuber who wears giant bows, colorful outfits, and has a larger-than-life personality. Initially, she catapulted into fame by appearing on two seasons of Dance Moms. Since then, however, she has starred in a movie, recorded music, and amassed quite the following on social media. Between her high energy and her quirky sense of style, she's the perfect person to be able to keep up with small children. And JoJo Siwa babysitting North West shows the 5-year-old is living her best life.

Yep. Apparently the eldest child of Kim Kardashian and Kanye West had the opportunity to hang out with JoJo for some one-on-one fun, according to BuzzFeed. (You can watch the 7-minute video on Siwa's YouTube channel.) Spoiler alert: JoJo's house is exactly has bright and sparkly as you might imagine. Fittingly, North showed up wearing a rainbow tutu dress, an oversized bow, and a colorful ponytail. JoJo enthusiastically greeted them, Kim K reminded North to call her if she needed anything before leaving, and then the pair set off to explore JoJo's house. First stop: JoJo's room. I'm not gonna lie; I'm a little jealous of her unicorn bed with a slide. North seemed to love it, too!

JoJo also let North pick out one of her famous giant bows to wear — in addition to the one she was already wearing.

The pair then played hide-and-seek before heading to the kitchen for some slime making, according to Cosmopolitan. (Is that a nacho machine on her counter?)

There, both JoJo and North add copious amounts of glitter to their giant bowls of colorful slime — before mixing it all together and making an enormous mess on the floor. So. Much. Glitter.

During North's visit, she and JoJo also checked out her gum ball machine and her claw game — along with her brightly-colored car. According to the Daily Mail, it's a customized BMW convertible that has JoJo's face on the hood and 'Nickelodeon's JoJo Siwa D.R.E.A.M. The Tour' on the front.

They even had a dance party, during which North did the splits like it was NBD.

Basically, hanging out with JoJo was every 5-year-old's dream.

By the time Kim Kardashian came back to pick up her daughter, North probably had a sugar high from all of the "JoJo Juice" and gum balls.

"What was your favorite part about the day?" JoJo asked the 5-year-old, after her mom arrived. "Making a big mess!" the 5-year-old exclaimed. To which Kim K pulls a total mom move and replies, "Oh my god, you did make a big mess. OK, we have to go clean up your mess." (JoJo assured them it was fine, and they didn't need to clean anything, Best babysitter ever.)

"Did you have the best day of your life?" Kardashian asked her daughter.

"Yes!!" North shouted while jumping up and down.

JoJo had one more awesome surprise for North before she left: A ticket for her and however many friends of her choosing to one of JoJo's concerts.

But seriously, though. I think most kids would have a blast at JoJo Siwa's house. Care to take my three older kids for a day, JoJo? Because North West was clearly living her best life.