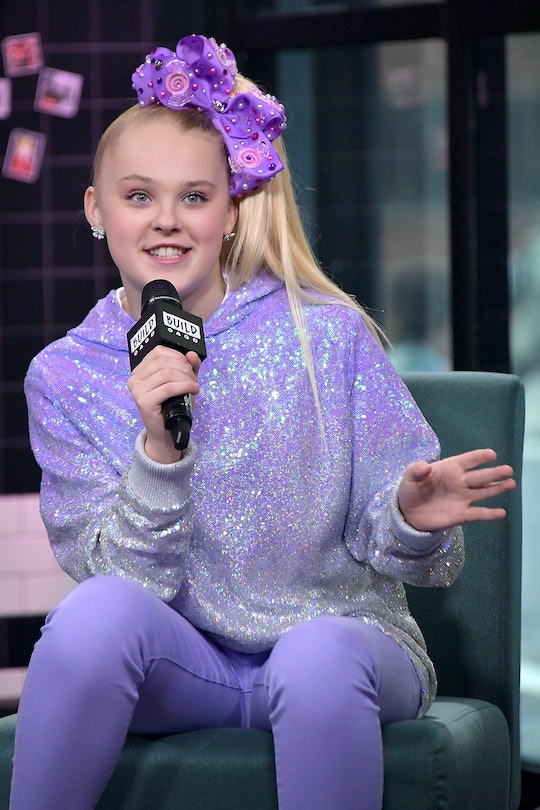 JoJo Siwa is already in high gear for her upcoming Nickelodeon’s JoJo Siwa D.R.E.A.M. concert project, which will see the young star hit a good portion of North America. But Siwa just added 28 more dates to her tour, so get your bows, sequins, and brightly-colored clothes (and maybe ear plugs, if you're braving the screaming crowds with the kids) ready.

Siwa appeared on Live! With Kelly and Ryan in New York City on Tuesday to kick things off with a fun live performance in festive Santa-wear, as JustJaredJr. reported.

With the 15-year-old wunderkind's tour having had a great audience response, Siwa then announced her tour's expansion, with 28 more dates to follow her original schedule. Clearly, Siwa connects with her young audience: 24 tour dates are already sold out, including Los Angeles, Cleveland, and Atlanta, according to her website.

Now, the performer has added on to her original schedule for next summer, according to her website, with new shows kicking off July 10 in Orlando, Fla., with the final bow in Vancouver, British Columbia. Extra stops in between will include Las Vegas; Boston; Charleston; Omaha; Milwaukee; Pittsburgh; Philadelphia; Long Island; Anaheim and Toronto.

Sounds like an exhausting schedule, but as she told Kelly Ripa and Ryan Seacrest on air, Siwa is excited to get out there and meet her fans from all over.

"It's going to be a really long time on the road ... I'm excited to be out there, to go see every state, go see all my fans. I just think it's going to be so much fun!" said the Nickelodeon-affiliated star, who has 7.5 million followers on Instagram alone and whose hits include “Boomerang" and “Kid in a Candy Store."

Siwa may have a distinctive look that appeals to younger kids rather than teens her own age, but that seems OK by her. She told J-14 magazine that one of the reasons she takes her fame seriously is because she genuinely hopes to end the cycle of bullying.

That's why the singer is so passionate about speaking up in favor of kindness among kids. “If there’s someone getting picked on ... be helpful to them,” she added. "... What I want is to tell people who are getting bullied to stand up to the bully and not let it be OK ... I want people to stand up and to be confident.”

In between touring, doing new videos for her YouTube fans, and juggling home schooling, according to USA Today, Siwa is just a normal kid who lives in Los Angeles and relies on her manager-mom, Jessalynn, to help her make it all happen. Oh yeah, there's also her merchandise line, including those infamous bows, that has earned her several million dollars, according to Celebrity Net Worth.

With the first batch of seats having sold out, you'll have to act fast, but if your kids are big JoJo Siwa fans, getting to see her live just might be the highlight of their year.

Tour dates and ticket information are available on Siwa's site.

More Like This
Celine Dion Shares She's Been Diagnosed With A Rare Neurological Disorder
“Dominick The Donkey” Is The Annoying Christmas Tradition I Can't Live Without
Aww! 2-Year-Old Archie Is "Very Happy" To Be A Big Brother
'Harry & Meghan' Shares Never-Before-Seen Photos Of Archie & Lilibet