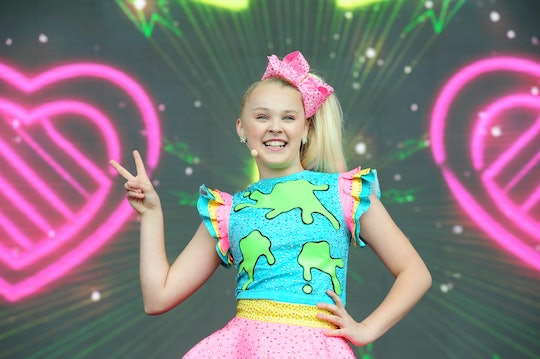 Jojo Siwa Addresses Her Recalled Makeup In A New Video

Earlier this month, Claire's Stores voluntarily recalled cosmetic kits after asbestos was reportedly found in the product. These kits were in collaboration with pre-teen YouTube sensation, Jojo Siwa, who remained quiet about the issue until Saturday. In JoJo Siwa's new video addressing her Claire's makeup, it's easy to see that she cares so deeply about her fans and their safety.

Over the weekend, Siwa posted a video to her channel addressing the makeup kit, which was pulled from Claire's shelves. The peppy pop star took a stripped down approach to the video, appearing in a more serious manner than normal to address the concerns involving her product.

"Safety is myself and Nickelodeon's number one priority in everything — in every JoJo product, in everything out there," Siwa said in the video. "This product is something that, with a lot of things, that I put my trust into other people's hands. We're working really, really hard to make sure that this product is recalled and off all shelves and also — that anyone who has this product — you can get a refund, no matter what it is. If it's used, if it's unused, you can get a full refund."

"But I just wanted to let you guys know the situation and I hope you understand, and I thank you for understanding," she added. "Because it is serious to me, and means a lot to me."

As previously stated, the JoJo Siwa Cosmetic Kit was voluntarily recalled by the Food and Drug administration on June 6, after the makeup kit tested positive for asbestos. The heart shaped kit included eyeshadow, where trace asbestos fibers were found in, and was sold between July 2018 to May 2019. Claire's said in a statement that they were not aware of any adverse reactions, injury, or illness associated with the exposure.

Claire's told Romper that they voluntarily recalled the kit out of "an abundance of caution." "Claire's stands behind the safety of this item and all other Claire's cosmetic items, as such small trace amounts are considered acceptable under European and Canadian cosmetic safety regulations," Claire's told Romper in a statement. "In addition, last year Claire's moved to talc-free cosmetic manufacturing to prevent any further concerns about talc contamination. Claire's also supports increased FDA oversight on personal care products."

"We will provide a full refund to anyone who has purchased the products."

While asbestos is a naturally occurring mineral, it is a known carcinogen with well-known health risks, according to the FDA. Children in particular have more time to develop asbestos-related illnesses after exposure, because they have more years ahead of them, according to the Centers for Disease Control and Prevention. Exposure to asbestos can lead to certain health problems involving the lungs and breathing.

But all that parents can do about this is be smart and safe. If their kids have a JoJo Siwa Makeup Set at home, then they should stop using the kit immediately and return it for a full refund. While voluntary recalls are more safe and serious compared to Siwa's other YouTube content, parents (and her viewers) should pay attention to what she is saying.