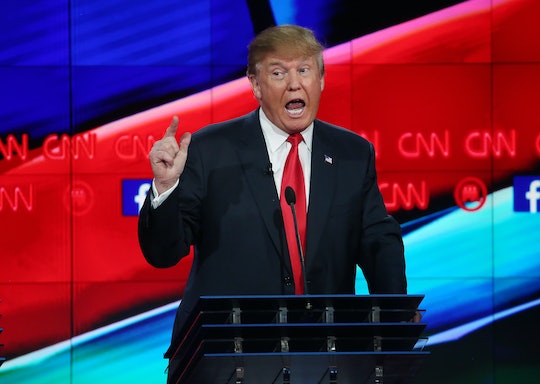 Donald Trump has a lot of crazy ideas. But during the Dec. 15 CNN Republican debate in Las Vegas, he said some really odd things about who owns the Internet. Twitter responded as you'd expect, offering jokes about Donald Trump's Internet quotes at the GOP debate throughout the night.

Donald Trump was asked a question about closing down the Internet to stop ISIS. Asked directly by moderator Wolf Blitzer if Trump was open to closing parts of the Internet, Trump responded, “Yes, sir, I am.” He explained:

I wanted to get brilliant people from Silicon Valley and other paces and figure out a way that ISIS cannot do what they’re doing. You can talk freedom of speech, you can talk anything you want. I do not want them using our Internet.

What does that even mean? How would you even do that? It sounds a little North Korea-ish, right? After Trump's answer, Ohio Gov. John Kasich answered the same questions and wholeheartedly disagreed with Trump. There are a lot of ways to fight ISIS, but shutting down the web just isn't all that feasible, right?

Everyone Seems To Agree

I mean, as if his immigration policy weren't already getting out of hand, now we're going to shut down the world wide web? Say it ain't so, Trump.