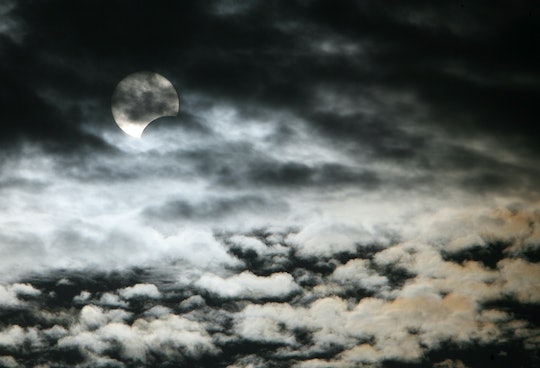 Jokes About The Solar Eclipse & The Apocalypse Are Hilarious

It goes without saying that most Americans are psyched to witness Monday's solar eclipse. Although it's totally reasonable to be excited about a rare celestial phenomenon, it's also OK to be one of the many people who are more amped to spend the event inside cracking jokes on the internet. If you're a total procrastinator (who has the time to buy NASA-approved viewing glasses?) or if you simply couldn't care less about the sun and moon's drama, you can find solace in all these jokes about the solar eclipse and the apocalypse. If the world is actually about to end, you might as well spend your final hours reading hilarious tweets, right?

For most of the summer, people have been preparing for the eclipse. From articles on how not to destroy your eyeballs to countless listicles on the best viewing parties, the solar eclipse has dominated headlines (President Donald Trump must be so jealous RN, by the way). While most of America has spent these past few months freaking out, the great people of Twitter have spent their time compiling a stockpile of jokes just for the occasion. Whether you're someone who can't be bothered by the solar eclipse or if you can't resist a good quip about the world ending, here are the best jokes about the solar eclipse and the apocalypse.

If You Can't Be Bothered By The End Of The World

If You Find The World's Demise Hilarious

If You Like Your Apocalypse With A Side of Politics

If You Can't Resist A Good Apocalyptic Trolling

Ah yes, Twitter did not disappoint on Monday. Although it's unclear if the internet will be here Tuesday (the end of times, etc.), it's obvious America still has its sense of humor. Considering the political climate it pretty atrocious right now, it's nice to see the internet coming together to celebrate its collective ennui, sarcasm, and cynicism. Who knew the apocalypse would end up being so hilarious? Maybe the world should end more often — Americans need all the jokes they can get these days.

As for when Twitter will be able to break out the apocalypse jokes again, the next solar eclipse will occur on April 8, 2024, according to NASA. If you failed to come up with a good joke this year, you have seven years to drum up a witty take on the solar eclipse (depending on if the earth is still here, of course).