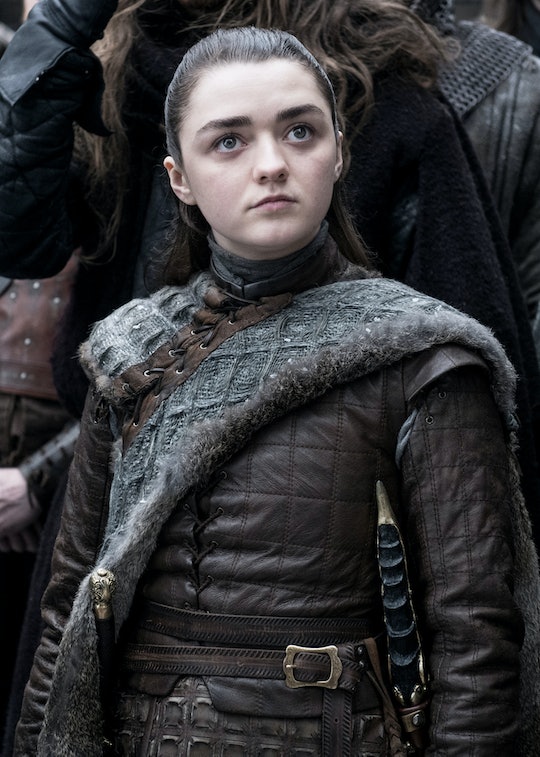 Jon & Arya Had A Heartwarming 'Game Of Thrones' Reunion

Jon Show, Daenerys Targaryen, her formidable armies, and two remaining dragons finally made it to Winterfell when Game of Thrones opened on Season 8. Of course, Jon's surviving half-siblings were there waiting for him — all of whom he believed dead. And when Jon and Arya reunited on Game of Thrones, both of them burst into tears.

The whole capital gathered to greet Jon and Dany in a homecoming parade of sorts and Bran was waiting to meet him in the castle courtyard. Their reunion was heartwarming enough, but Jon understandably wondered where his sister was. "Lurking somewhere," Sansa replied. Jon didn't notice Arya in the crowd when he rode past her and she seemed a little stung by it. But it's been eight years since he saw her last and she's grown up quite a bit.

Luckily, the season premiere didn't drag their reunion out too long. Arya snuck up on Jon visiting the weirdwood tree and were able to enjoy seeing each other for the first time without spectators. Honestly, this was probably for the best — it may have been a lot less emotional had they been in public, given both Jon and Arya's penchant for stoicism.

Jon immediately noticed that Arya still carried the sword he had made for her. She told him she named it Needle and he asked if she'd ever used it. So, clearly, the pair have a ton to catch up on. But it was obvious that the love still ran deep between the siblings. This may be the first time all the living Stark children are back together in Winterfell since Season 1, but, sadly, there wasn't much time for life updates. Bran had a vision seeing that the Wall had fallen, the Night King had turned one of Daenerys' dragons into a wight, and the Army of the Dead was heading south. Jon sprang into action pretty much right away.

In other sibling reunion news, Sansa was less than thrilled Jon had bent the knee to Daenerys, and it took her all of about two scenes to realize he was also madly in love with the Dragon Queen. She questioned whether Jon had built an alliance between their houses — submitting to her rule in the process — because of his personal feelings or to beat the Army of the Dead. Jon seemed pretty surprised by Sansa's boldness, but at least everyone's on the same page, re: a post-apocalyptic wedding!

The season premiere continued to be an episode of big feelings for Jon Snow. He also finally learned who his real parents were, thanks to Bran and Samwell Tarly's dual detective work. Sam was reluctant to be the one to divulge the information but Bran correctly pointed out that he was no longer Jon's brother, not really. So Sam took up the mantle and broke the news: Jon was actually Aegon Targaryen, sixth of his name and protector of the realm. He was pretty overwhelmed but didn't seem to reject the idea outright. Jon has never been particularly interested in ruling, but will he start to feel a sense of duty now that he knows his true parentage? And what will it mean for his connection to the other Starks? There are only five episodes left to find out.