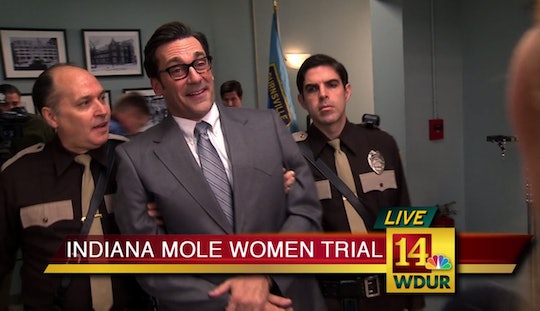 After an entire season of trying to move past her unavoidable past, Kimmy Schmidt receives a rather alarming call in the finale of Unbreakable Kimmy Schmidt from non other than the man that abducted her 15+ years ago. Yes, Jon Hamm is back on Unbreakable Kimmy Schmidt, and he's bringing a truth bomb that will certainly set up Season 3. After an educational trip to Orlando to meet her mom, Kimmy returns to New York to continue her life as planned when she receives a phone call from Reverend Richard Wayne Gary Wayne. It is then that we learn that Kimmy and the Reverend are married — yes, married — and that he's going to need a divorce so he can marry a new special someone. OK, rewind — when did Kimmy and the Reverend get married?

The entire season of Unbreakable Kimmy Schmidt seemed to be leading towards the return of the Reverend, but who knew he'd bring this tidbit of information with him? During the season, he was alluded to with flashbacks and voiceovers, but we hadn't actually seen his face until the final seconds of the season when he returns (in an orange jumpsuit and a nice pair of Warby Parker-esque glasses).

Naturally, Kimmy is upset to even hear from Reverend Richard Wayne Gary Wayne, but what is even more surprising for her to hear is that they are married. Excuse me, but what? Did the Reverend marry her while she was underground without her even knowing? I don't know why I'm acting surprised by that — this guy is a Grade A skeezeball who kept a group of women underground for 15 years after telling them the world ended. What do I expect him to do in between creating video audition tapes for reality shows?

This will certainly set up some drama for Season 3. Hopefully Kimmy can get out of this marriage ASAP without any problem, because this is truly something she needs to put behind her. She was doing so well until this phone call, hopefully she can put this behind her and continue to move forward with her new life.