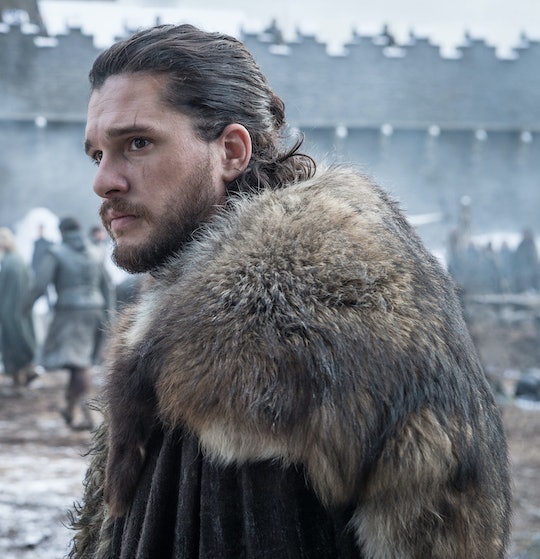 After many seasons' worth of speculating who the three dragon riders would be, viewers finally saw Jon ride a dragon on Game of Thrones, and it was just as majestic as Twitter was expecting. Though it was believed that only Targaryens could ride dragons, the show made pretty clear it was going to do away with that idea when Tyrion successfully stroked one of them a couple seasons back. (There is some speculation that he's actually a Targaryen descendent, too, but I doubt the show is going to spring that storyline on us this close to the finale.)

Of course, Jon Snow really is a Targaryen, which he finally learned in the Season 8 premiere — two seasons after Bran saw his birth as the Three-Eyed Raven, and one season after Samwell Tarly discovered at the Citadel that he wasn't actually a bastard after all. His parents wed in a secret ceremony prior to his birth. Jon didn't know any of this before he rode his first dragon, though. The ride mostly seemed like a ploy to scope out a good make-out spot with Daenerys. Earlier in the episode, she asks a Dothraki how much her two surviving dragons have eaten, and when she hears the answer is 18 goats and 11 sheep, she panics.

"The dragons are barely eating," she breathlessly replies.

The pair head out to check on them, and Daenerys quickly surmises they hate being in the North — pretty understandable for fire-breathing reptiles to despise a snowy tundra. One of the dragons, however, noses right up to Jon looking for pets. Presumably, this is the same one he bravely faced down last season.

"Go on," Daenerys encourages him, despite his insistence that he doesn't know how to ride a dragon. "Nobody does, until they ride a dragon," she explains.

Jon maintains his skepticism, but awkwardly mounts the dragon anyway, wondering what he's supposed to hold onto. "Anything you can," Daenerys remarks. She's very clearly having fun with all of this, and Jon is often at his best when sheepishly trying to prove himself to women. (R.I.P. Ygritte and her sick burns.) As he rides off with Daenerys at his back, Jon's dragon takes him over the castle, so everyone in Winterfell can see them. Not exactly keeping his ~connection~ with Dany under wraps, but don't worry, Sansa calls him out on it later.

Things get a little dicey when the dragons nose-dive into a canyon, but Jon sticks the landing. "You've completely ruined horses for me," he jokes when he finally dismounts. Lo and behold, the couple find themselves at a very romantic and secluded waterfall, and after an embarrassing attempt at flirting, they finally kiss. Jon shares a harrowing moment of eye contact with the dragons while literally macking on their mom but according to Dany, it's fine. The whole ride was reminiscent of Harry Potter/How To Train Your Dragon, which Twitter was quick to pick up on, but there was nothing anticlimactic about it. Jon's first dragon ride was worth the wait.

More Like This
Kim Kardashian Stars In Hilarious House Of The Dragon Parody, The Targashians
'The Proud Family: Louder & Prouder' Is Returning For Season 2 On Disney+
The Office Halloween Episodes: A Definitive Ranking
Lifelong Teacher Dr. Jill Biden Loves Watching Abbott Elementary Too