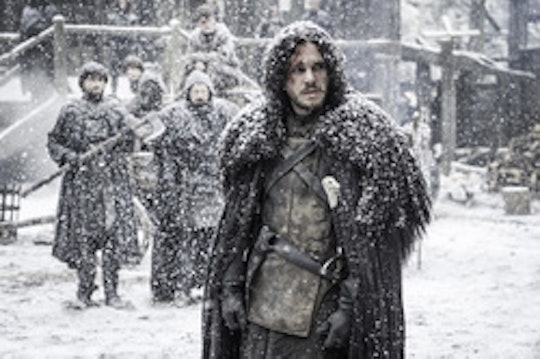 IT. FINALLY. HAPPENED. We've been waiting night and day (and to be honest, since the closer of Season 5) for this to happen, and tonight, we got our wish. Jon Snow is alive, and it's the magic we've all been waiting for. I will never again have any chill, and I'm not sure who to thank. Ghost? Melisandre? Ser Davos' unwavering faith in Melisandre's magic? Literally, thank you everyone. It was totally a group effort.

Rumors have been swirling since he was stabbed and left for dead by the Night's Watch that Jon Snow was totally dead, but like, not really dead, and tonight confirmed that truth. Jon isn't dead — and that's going to have huge, huge implications on the rest of this season and the series as a whole. If you missed it, or want to celebrate the joyous rebirth of the show's leading man, allow me: in desperation, realizing he's running out of time, Davos heads to Melisandre's chamber and literally begs her to perform some kind of magic on Jon to make him come back to life. But Melisandre isn't gung-ho about magic, which is an incredibly shocking. (No doubt the realization that she put her faith in the wrong man has been wearing on her.) But she gives into Davos' requests, and then, by the cover of night, surrounding by Jon's faithful Night's Watch loyalists and Wildlings (and Ghost), she performs a sacred kind of magic on Jon's body. But here's where things get interesting. Melisandre's magic fails (or does it?) and she leaves the room, followed shortly by everyone else, leaving just Jon and Ghost. Alone. And that's when it happens.

Ghost opens his eyes and Jon Back From The Dead Snow draws his first gasp. So clearly not dead. Melisandre did the damn thing.

The moment Jon comes back to life pretty much ensured that I have forever lost my ability to have any kind of chill whatsoever, and the internet pretty much felt the same.

The OH MY GOD Moment:

If Only The Same Was True For Mufasa:

This Is Too Real

This About Sums It Up: