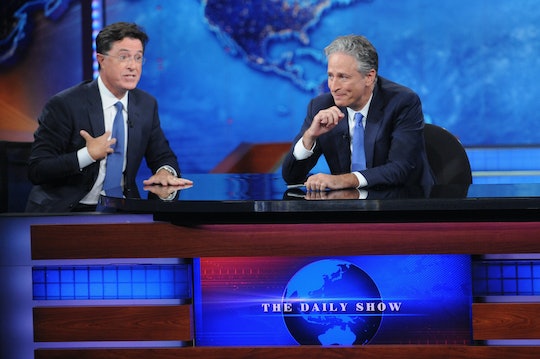 Jon Stewart Joins Stephen Colbert For An Election Song, & It's Everything You Could Want

This election cycle just hasn't been the same without Jon Stewart around. There have been a ton of amazing comedians filling the void he left behind when he exited The Daily Show, but Stewart's particular brand of comedy has still been greatly missed. That's why it's so exciting whenever he does choose to come out of retirement and make an appearance, like he did on last night's The Last Show. Stewart showed up for one last reminder about the importance of voting that received the full Broadway treatment. Jon Stewart joined Stephen Colbert for an election song, and it was everything you could ever want from a Stewart/Colbert musical voting extravaganza.

The bit began during Colbert's opening monologue, which was interrupted by the weeping of an adorable little Victorian street urchin ragamuffin who was simply too scared to vote. Colbert encouraged her with a little ditty and a quick kick line. It seemed like that might be it when suddenly Stewart's disembodied voice was heard in the wings and moments later he appeared in a sash, waistcoat, and very dashing red top hat. Though Stewart needed no introduction – as indicated by the crowd going wild – Colbert gave him one anyway, as Stewart is now apparently "the Mayor of Candytown." Well, that would explain what he's doing with all his downtime.

Stewart took the opposite side from the vote-encouraging Colbert, explaining that the little ragamuffin didn't have to vote if she didn't want to – and tossing some trouser toffee into the crowd, as is expected of the mayor of Candytown. However, Stewart was singing a different tune once Colbert revealed to him just who was running for president. Stewart was so shocked to hear that Donald Trump was running that he did not one, but two spit takes into Colbert's face while they both tried very hard to keep their faces straight. They didn't really succeed, which was more than half the charm.

However, even Stewart's change of heart didn't inspire the little girl to hurry to the polls. The other candidate is Hillary Clinton, after all, and the little girl didn't know which option was worse ("He is," Stewart and Colbert pointed out immediately). She began to sing about feeling like she didn't have a choice or a voice in the system, especially when she didn't fully support either candidate; abstaining seemed like the best option. Her warbling vocals almost swayed Stewart and Colbert to her side when the the perfect deus ex machina arrived in the form of Hamilton's Javier Muñoz. He was able to set everyone straight with a musical interlude of his own, thankfully.

After that, everyone on stage – and in the audience – was in agreement. They were all voting, and just in case they had any remaining doubts, Stewart provided some key reminders about Trump as the segment came to its end. Do you really want a president with hands that tiny? And what he does with them is even worse.