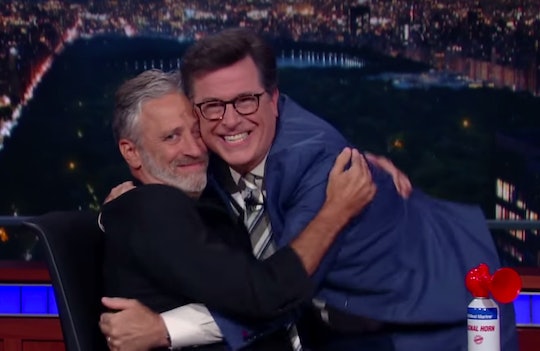 Former host of The Daily Show Jon Stewart is back, and he's as hilarious and incisive as ever. The Late Show with Stephen Colbert aired four nights of live Republican National Convention coverage, incorporating everything from a star-spangled musical number to Hunger Games-style party crashing. Though Stewart got in an appearance Monday night during a sketch designed to introduce the return of Colbert's Comedy Central character, Stewart got his biggest moment in the spotlight Thursday. Colbert supplied the desk, suit, and tie, but Jon Stewart's best quotes from his RNC return are evidence that he's still got it.

Stewart surprised many last year when he left The Daily Show right before an election year. In April 2015, TIME reported that Stewart said the show wasn't as enjoyable to him as it had been in the past; he also said he didn't anticipate a "wildly different" election in 2016. In June 2015, businessman Donald Trump announced his plan to run for president, according to CNBC. When Stewart left The Daily Show at the end of last summer, the United States was only at the beginning of what would become an absolutely unpredictable Republican primary. Though comedian Trevor Noah replaced Stewart on Comedy Central, there's no question that many felt the absence of Stewart's voice after nearly two decades of tuning in for his input. Stewart's return to late-night TV gave fans what they wanted, but it also advanced a complex critique of Republicans' response to Trump's candidacy.

On The Republicans' Plan:

Stewart opened the segment talking about Trump's Thursday night speech. He said that, instead of getting the "compassionate and generous" man Ivanka Trump described, America got an "angry groundhog." Then, he summed up the messaging of the entire convention:

But the Republicans appear to have a very clear plan for America. They’ve articulated it throughout the convention. One, jail your political opponent. Two, inject Rudy Giuliani with a speedball and Red Bull enema. And then three, spend the rest of the time scaring the holy bejeezus out of everybody.

After summarizing the RNC, Stewart set up the rest of the segment:

With the Rio Olympics coming up, I’m enjoying the gymnastics portion of the program that’s about to occur. That will be the contortions that many conservatives will now have to do to embrace Donald J. Trump a man who clearly embodies all the things that they have for years said that they have hated about Barack Obama.

He cut to multiple clips of Fox News panelists calling President Obama "inexperienced," "divisive," "thin-skinned," and "authoritarian." Stewart said that, given their earlier criticism of Obama, Republicans would need to pivot in order to justify their selection of Trump as the party nominee. He zeroed in on Fox News' Sean Hannity (referring to him as "Lumpy"), using clips of Hannity for the rest of the segment to illustrate the intellectual "gymnastics" of the GOP.

Stewart ran clips of Hannity accusing Obama of using "scare tactics" and "racial rhetoric" to divide the country. When asked about Trump's comments on Mexico, Hannity attempted to justify the words by saying Trump acknowledged that some Mexicans "are good people." Stewart responded:

I’m not an expert on racial unity, but I do believe that some of our more vaunted historical leaders in that area did retweet white supremacists less than Trump.

Meanwhile, here’s how Lumpy feels about the guy who sits in a literal golden throne at the top of a golden tower with his name in gold letters at the top of it eating pizza with a knife and fork. How do you feel about that guy?

After a clip of Hannity praising a description of Trump as a "blue collar billionaire," Stewart said, "That's not a thing."

After providing evidence for hypocrisy, Stewart delivered a strong conclusion:

So let’s just say it for real. Here’s where we are: either Lumpy and his friends are lying about being bothered by thin-skinned authoritarian less-than-Christian readers of prompter being president, or they don’t care, as long as it’s their thin-skinned prompter authoritarian tyrant narcissist. You just want that person to give you your country back. Because you feel that you are this country’s rightful owners. There’s only one problem with that: this country isn’t yours. You don’t own it. It never was. There is no real America. You don’t own it. You don’t own patriotism, you don’t own Christianity, you sure as hell don’t own respect for the bravery and sacrifice of military police and firefighters.

Stewart said that Republicans struggled to accept people fighting for equality because they felt it caused division, but he said that point of view is incorrect.

Regardless of party affiliation, it's difficult to deny that Stewart has a unique power to advocate for introspection. With so much on the line this November, it's exciting to have his voice back on TV.