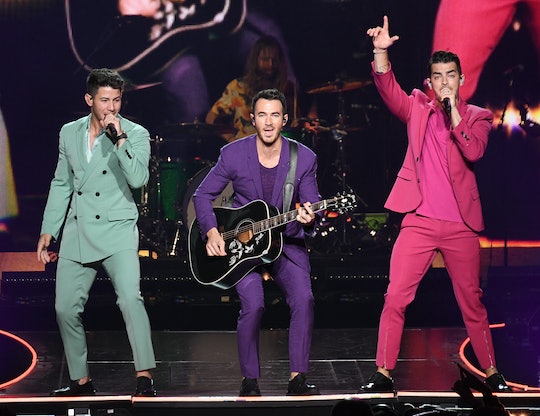 While a lot can be said about the dangers of social media, sometimes platforms like Instagram, Facebook, and Twitter make miracles happen. At least, that was the case when users on all three social media networks came together under a viral campaign that resulted in all three Jonas brothers surprising a fan in the hospital who'd had to miss their recent concert due to her chemotherapy treatments.

When 16-year-old Lily Jordan realized the chemotherapy treatment she was receiving for cancer was going to cause her to miss a Jonas Brothers' concert scheduled for Saturday in Hershey, Pennsylvania, she decided to take a chance. "I was supposed to be at your Hershey concert tomorrow but instead I'm across the street doing chemo," the teen wrote in a message to the band posted, along with a selfie, to Instagram. "If y'all wanted to pop in I'll give you my room number." Jordan then asked her followers to share her post and the hashtag #lilyseesthejonasbrotherschallenge2019.

Jordan's invitation quickly went viral with users on Instagram, Facebook, and Twitter all sharing the post. Even Pennsylvania's Congressional Rep. Scott Perry got in on the action, sharing her invitation on his official Facebook page. "Our good friend Lily is fighting for her life in Hershey tonight, and so badly wanted to see the Jonas Brothers tomorrow night at Hersheypark, but can't because of her urgent treatment," Perry wrote. "If there is anyway for them to visit her, we are lifting up her hopes and our prayers for help."

In the end, Jordan's social media campaign worked and all three Jonas brothers visited her at the Penn State Children's Hospital at the Milton S. Hershey Medical Center before their concert Saturday. "We saw your message and had to come over," Joe Jonas said after walking into Jordan's room in video shared by the hospital.

"It went everywhere, my entire feed was filled," Kevin Jonas added in reference to the teen's invitation.

Before signing autographs and taking photographs with her and her family, the three brothers chatted with Jordan about their upcoming concert, asking if she had a favorite song they could play that night in her honor. After a bit of thinking, she requested "S.O.S.," a single from their 2007 album "Jonas Brothers."

In an Instagram post published after the band's visit, Jordan expressed her gratitude to all those who'd helped spread the word about her invitation. "Wow. The power of social media, you guys," she wrote. "YOU did this. YOU made my crappy chemo session into something incredibly special and unforgettable. Thank you."

The teen also thanked the Jonas brothers "for taking time out of your day to come pay me a visit," saying it had "literally made my life."

After taking a six year hiatus, The Jonas Brothers are back on tour with their latest album, "Happiness Begins." The band is set to play PPG Paints Arena in Pittsburg, Pennsylvania, on Tuesday.