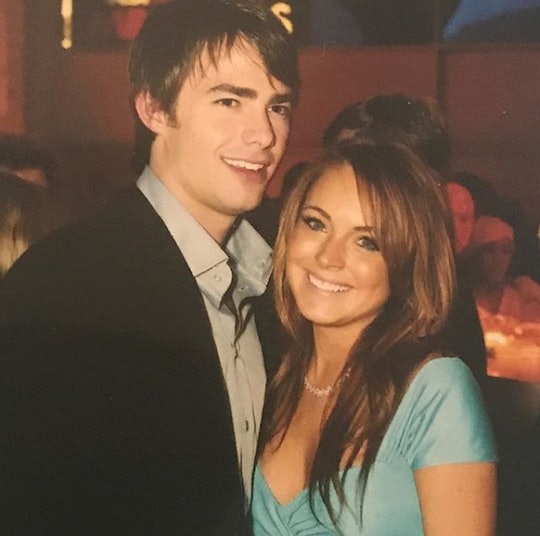 "Literally since the day Mean Girls came out, I have never gone a day without someone coming up to me and telling me that my hair looks sexy pushed back," Jonathan Bennett, who played Aaron Samuels in the classic teen film, tells me over the phone. There are definitely worse things to be known for IMHO. And Bennett is perfectly content to let people think of him as Aaron Samuels, for, well, forever. "My face looks like my face," he says, explaining, "So I will always be to most people Aaron Samuels in their heart."

But Bennett isn't just OK with being constantly recognized for his most famous role — it sometimes feels like he is actively seeking it out. I mean, unless you've been in hiding for the past several months, you can't have missed his cameo as Aaron in Ariana Grande's music video for "thank u, next." The video paid an homage to some of Grande's favorite teen movies including Mean Girls, Bring it On, Legally Blonde, and 13 Going On 30. "Ariana Grande told me my hair looks sexy pushed back. She's not wrong," Bennett says in the video — referencing not one, but two of the most famous lines in the movie. But that's not the only Mean Girls shout out Bennett has embraced. He also has a parody cookbook, The Burn Cookbook, currently available for purchase. And tangentially, when on Celebrity Big Brother, Bennett naturally gravitated toward Dina Lohan, his Mean Girls costar Lindsay Lohan's mom, who he first met while filming the movie.

And it's not just publicly that Bennett really owns his Aaron Samuels-ness. Even when interacting with fans he's a total good sport. "I know they want to ask it and I'll just say it to them first," he says. "I'll be like, 'Do you want to push my hair back?' And they're like, 'Yes!' and they scream, and I was like, 'You can push it back,' and they just get so excited." He explains that he's leaned into it so hard because the movie brings people so much joy. "It's not like a regular movie," he says and I swear to God it takes everything in me not to respond, "It's a cool movie." But that only reinforces his point — Mean Girls is one of those cultural touchstone movies that informs your very language, whether you want it to or not.

Early in his career, Bennett played the "boyfriend" a lot. He points out he's played boyfriend to Hilary Duff, Haylie Duff, Ariana Grande, Lindsay Lohan, and Amanda Bynes. I ask why he thinks he keeps getting cast in these roles and he responds, "Because I'm so damn adorable." He means it as a joke but... it's kind of true. Bennett is damn adorable, whether he's reprising his role as Cady Heron's boyfriend for a music video, or becoming besties with Ryan Lochte on Celebrity Big Brother (Bennett says they, along with Joey Lawrence, are still close, by the way).

Bennett has finally aged out of playing high school heartthrobs, but he's got another high profile reunion on the docket that you're not going to want to miss. He played Hilary Duff's boyfriend in Cheaper By The Dozen 2, and in April you can catch him playing her pal in the movie The Haunting Of Sharon Tate, a biopic based on the murder of Sharon Tate by the Manson family. Duff plays Tate and Bennett plays Jay Sebring, the actress' hairstylist and best friend, who was also murdered. Bennett calls the movie "one of the best movies," and praises Duff's performance in it as "phenomenal."

Another high profile reunion? When Bennett and Lindsay Lohan got together on the after show of her new reality series Lindsay Lohan's Beach Club. "The fun part was we basically turned into like 16 year old kids again because we hadn't seen each other since we were so young," Bennett said.

I get it. Mean Girls premiered when I was 16 and talking to the real life Aaron Samuels, for a minute I, too, was a teenage kid again.