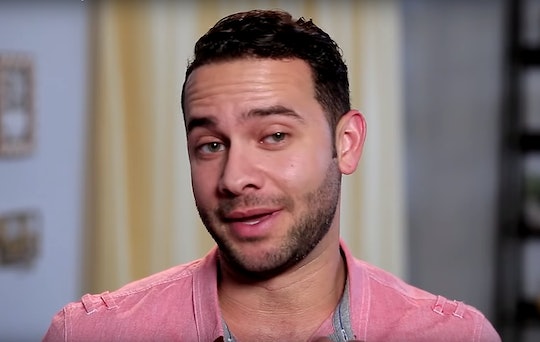 On the Season 6 premiere of 90 Day Fiance, viewers got a chance to meet Jonathan Rivera and Fernanda Flores, a new couple with a 12-year age gap who met in Mexico. Jonathan flew from North Carolina to Mexico to bring Fernanda back on a fiance visa. The couple may face some drama down the line, but Jonathan’s Instagram from 90 Day Fiance proves that he’s pretty smitten by his fiance.

The couple first met at a club when Jonathan was on vacation in Mexico, reported In Touch Weekly, and he was so taken by Fernanda that he extended his trip three extra days. “I’m at the club and I see this girl walk in with a long black dress — I swear, it’s like everything stopped. We got off the dance floor after about an hour and a half and we spent the rest of the evening talking,'” Jonathan said on the show. “I switched my flight — ended up staying three more days and it turned out no one brings the best out of me like Fernanda does.” When they first met, Fernanda was 17 and Jonathan was 30, and in the teasers for the season, it looks like their age gap may play a part in their relationship drama down the line. But the couple has been together for two years now, and they still seem to be going strong.

Jonathan’s Instagram page is full of pictures of the happy couple. If you scroll down through his posts, you can see that the very photos he posted with Fernanda are from December 2017, in which he calls her “my everything” and is seen celebrating New Year’s Eve with her in Playa Del Carmen. On Valentine's Day this year, just a few days before they left for the U.S., Jonathan posted a picture of him carrying Fernanda behind him, and captioned it with loving words for his fiancée. “Happy Valentine's Day to this beautiful soul. The one who gets me out of bed in the morning, the one keeps me grounded and always supports my dreams,” he wrote. “She does the little things and I am constantly reminded how lucky I am. To my best friend and future wife, I love you you baby!! U.S. bound in a couple days.” By April of this year, the couple was in Chicago, and Jonathan posted a picture of the two bundled in winter gear with the caption “Just goes to show that everything is possible.”

Jonathan owns a real estate agency called the The Rivera Realty Group, and he uses his Instagram page to promote properties every now and then. He seems to put a lot of hard work into his business, and it looks like Fernanda supports him with his endeavors. In one sweet Instagram post, Jonathan shared a picture of his bathroom mirror, on which Fernanda had left him words of encouragement. She stuck post-its on the mirror that read, “never give up” and wrote, “I love you” in lipstick. “Fiancé leaving words of encouragement in the morning,” he captioned the photo. “I knew she was a keeper.” Jonathan has also posted pictures of the two with his family, including a series of photos from his brothers wedding.

When you look at Jonathan’s Instagram, one thing is clear: he’s definitely in love with Fernanda and the loving words he writes for her shows how much he cares. Whether or not the couple gets married by the end of their 90-day visa requirement is yet to be seen, but so far, it looks like they are headed for a happy ending.