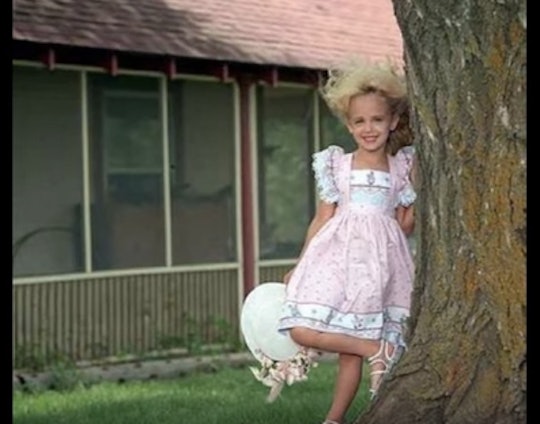 JonBenet Ramsey Pageant Videos Give Some Context To Her Tragic Death

This September, CBS is running a docu-series about the murder of JonBenét Ramsey, a 6-year-old pageant star whose 1996 death subsequently became the source of several investigations and conspiracy theories. These days, watching the JonBenét Ramsey pageant videos feels a little bit eery, knowing her tragic story. But the videos do give some context into how much the young girl seemed to enjoy doing what she did — or at least remind viewers of the docu-series that she was a real person, and not just a tabloid headline.

A lot of scrutiny came down on her family in the wake of her death simply because she was a pageant star, so seeing her on stage is important if you want to delve into the case. After JonBenét was found in the basement of her family home in Boulder, Colorado the day after Christmas in 1996, the ensuing investigation pretty much captivated everyone, mainly because several early suspects (all of whom were later cleared of any involvement) were some of her own family members. JonBenét went missing just hours before her body was discovered and the family reported a ransom note, asking for $118,000, the same amount that her father had recently received as a bonus for work. JonBenét's father John, her mother Patsy, who died from ovarian cancer in 2006, and her brother Burke were never charged with any crime.

When Romper reached out to the Ramsey family attorney, L. Lin Wood, for comment regarding public scrutiny, he had the following to say.

John Ramsey told ABC News in 2012 that he regrets the pageants. He said the family did it for fun, but that the pageant scene is a strange environment. "It's very bizarre. And, certainly Patsy and JonBenét didn't approach it that way. We — they just did it for fun," he said.

JonBenét's mother Patsy had also been in beauty pageants when she was younger and always contended that it was a fun mother-daughter activity that they did together. She said that doing pageants was one of the most "wonderful" times of her life.

The 6-year-old's murder shook everyone, but a lot of the backlash towards the family was focused on the fact that they allowed their young daughter to participate in pageant life. In some way, the images of the child parading around in lipstick gave way to a lot of unwelcome, insensitive hate towards the family. Many saw the fact that they had let their daughter live a public life so young as a reason to shame them for their parenting choices and her death.

John Ramsey, for his part, believes that the pageant life may have had something to do with his daughter's death. "Patsy had her sitting atop a friend's convertible in the Christmas parade waving at the people lining the streets," he said, according to ABC, and adding,

Patsy's mother later told me that a strange man approached the car during the parade and it made her uncomfortable. I think about these things now and it makes me cringe. We were so naïve. I now believe with all my heart that it's not a good idea to put your child on public display.

The JonBenét case is complicated and it's unlikely that a new docu-series will shed any light on what happened after all this time. But it's worth hoping that the added media attention will bring some justice for the family.