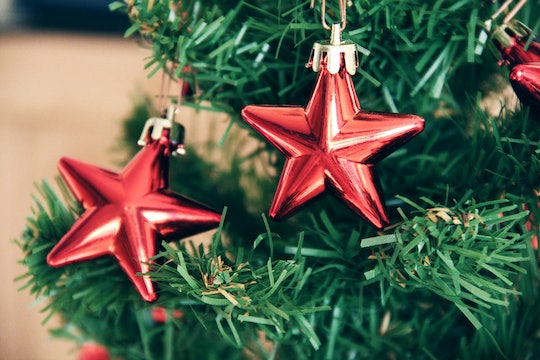 The murder of JonBenét Ramsey spurred a great deal of speculation. Officials still don't know who killed the pageant star, but the investigation led both law enforcement and a curious public to consider some particularly surprising stories: one theory posited that JonBenét's murderer played Santa Claus at her home only a few nights before. Though the man who wore the red suit, Bill McReynolds, died years ago, JonBenét Ramsey Santa theory clues keep amateur sleuths captivated to this day. Romper couldn't reach Bill McReynolds or Janet McReynolds for comment. Neither were formally charged and DNA ruled them out as suspects years later.

Bill often made Christmastime visits to the Ramsey family's Colorado house to play Santa, The Denver Post reported. He and his wife, Janet, lived in Boulder for three decades and had three kids, according to The Daily Camera, and Bill spent much of his career teaching journalism at the University of Colorado. He died at 72 from a heart attack in 2002. In retirement, he'd enjoyed playing Santa Claus; after JonBenét's death, the McReynolds relocated to Cape Cod, where Bill traded his Santa suit for days spent volunteering at the senior center. Janet said speculation that the couple had something to do with the murder forced their move and Bill's change in hobbies:

He loved being Santa, he loved little children, and then the Ramsey case destroyed that career and just devastated him. He loved that little girl. It was a very sad thing in his life because he genuinely loved children, and it was the happiest part of his life.

The book written by JonBenét's parents, Death of Innocence: The Untold Story of JonBenet’s Murder and How its Exploitation Compromised the Pursuit of Truth, mentions that Bill was a suspect, but Bill and Janet were never charged in the case. Both did provide authorities with "hair and writing samples," according to The Denver Post, though neither one was formally tied to the murder. Before his death in 2002, Bill spoke fondly of JonBenét. A separate article published by The Denver Post included quotes about JonBenét from Bill, who described the girl as "pensive, almost retiring." Bill said JonBenét gave him vials of gold glitter as Christmas gifts; he took the glitter with him when he had heart surgery. He said that JonBenét meant a great deal to him:

I felt very close to that little girl. I don't really have other children that I have this special relationship with - not even my own children or my own grandchildren ... When I die, I'm going to be cremated. I've asked my wife to mix the star dust JonBenet gave me with my ashes. We're going to go up behind the cabin here and have it blow away in the wind.

The McReynolds story resurfaces as a new CBS series reignites interest in JonBenét's death. The Case Of: JonBenét Ramsey is set to premiere Sunday, Sept. 18 at 8:30 p.m. Eastern Time. It's unclear whether the series will mention the McReynolds, but here are three clues often circulated as part of the theory.

First, the details of the actual Santa visit are, to some, unsettling. Bill and Janet visited the Ramsey house as Mr. and Mrs. Claus only two days prior to JonBenét's murder, according to CNN. A note that Bill allegedly handed to JonBenét while greeting her as Santa was later discovered in the girl's trash bin, The Guardian reported. According to CNN, it read, "You will receive a special gift after Christmas." The Guardian reported that the note used the word "present" instead of "gift."

Bill and Janet ended up sharing an unexpected connection to John and Patsy Ramsey beyond just their friendship. According to The Guardian, both parents' daughters were the victims of crimes committed on Dec. 26. On Dec. 26, 1974, Bill and Janet's daughter was abducted and "witnessed the sexual molestation of her friend," The Guardian wrote. JonBenét's body was found in the basement of the Ramsey family home on Dec. 26, 1996, People reported.

Because of the details of JonBenét's death, conspiracy theorists paid particularly close attention to a play Janet wrote, Hey, Rube. Staged by the Lnterart Theater in New York City, the show got a largely negative reviews in a 1978 issue of The New York Times. Hey, Rube offered Janet's "fictionalized" take on a 1966 Indianapolis killing, according to reviewer Mel Gussow. After seeing a performance, Gussow wasn't sure what to make of it:

In Janet McReynolds's “Hey, Rube.” a fictionalized dramatization of the Likens case at the Interart Theater, it is not clear what the author intended to write. The play could be a psychological study of the killer, a sociological study of sexism, a sympathetic profile of a hapless victim, or a courtroom melodrama.

Years later, Janet's play became much more than a dramatic retelling of the murder of a 16-year-old. In the text, The Guardian reported, "a young girl is molested, tortured, murdered and left in a basement." For conspiracy theorists, the parallels to JonBenét's death were jarring.

The Santa story continues to spur digital discussions and ignite speculation. But Bill and Janet were never charged with any crime, so it is, at this point, just a theory.