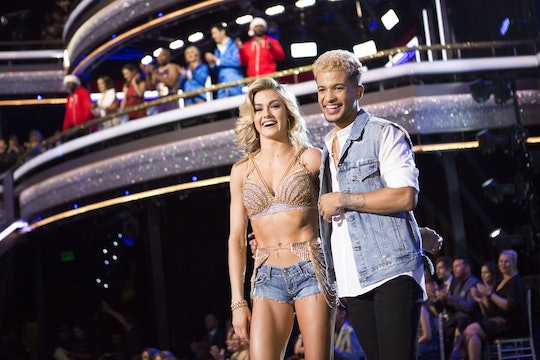 Well, here it is folks. Your new Dancing with the Stars champion! If you guessed Frankie Muniz, well, you'd be wrong. Jordan Fisher wins DWTS as, let's be honest, we all kind of knew he would. Aside from being the best dancer, he was also genuine, charming, and one of the most recognizable faces on the stage. It got to the point where I was almost bored watching him get perfect 10 after perfect 10. Couldn't he just trip up once? No, Jordan Fisher does not trip. Jordan Fisher is a dancing champion.

At the very end of the two-hour finale host Tom Bergeron announced that the winner of the competition was Fisher, often called by the judges "the one to beat." It turns out the judges do occasionally know what they're talking about. Fisher beat out fellow finalists, violinist Lindsey Stirling and underdog competitor Frankie Muniz. Stirling made an impression early on for her natural athleticism and grace, while Muniz proved himself to be possibly the hardest working competitor in the ballroom. But despite being the "people's dancer," Muniz came in third place. While I was personally pulling for Stirling (I like to be contrary), in the end she came in second place.

But let's not forget, this is also a victory for Fisher's dancing partner, choreographer, and coach, pro dancer Lindsay Arnold. The professional partners for the competitors play a huge role in how well the team does, by choosing material to best show off the celebrity's talents and choreographing the routines to please both audience and judges. This is the first time Arnold has won a Mirrorball trophy in her time on Dancing with the Stars and you could tell she really, really wanted that win. By the end of the competition she was pushing Fisher as far as he could go. Which, it turns out, was pretty darn far.

After 10 weeks of tense, bedazzled competition, it became pretty clear that Fisher was the front-runner. By the time the finale rolled around, Fisher looked like he had been doing this stuff his whole life. In one segment, notorious curmudgeon and stickler, judge Len Goodman, said that Fisher was simply "a natural," and later called him the best male celebrity the show had ever seen. The other judges agreed. At this point, it was hard to even tell him apart from the actual professional dancers during his routine.

The second part of the finale brought back all the competitors from the show, and everyone got a chance to perform a little solo routine. In addition to their dances, Fisher and Stirling each performed a musical number. Fisher sang "What Christmas Means to Me" — in case you'd forgotten that he can sing, while Stirling performed a duet on her violin alongside BC Jean, who is incidentally Sterling's partner Mark Ballas's wife. Other performers included Nick Lachey, Debbie Gibson, and Kelsea Ballerini. And that's not even including the group numbers, which contained a heck of a lot of Christmas-themed shirtless dancers.

But of course, the real reason for the show was the three finalists. Each performed first a reboot of their favorite routine from the season. They then were challenged to dance a "fusion," which blended two different styles of dance. Obviously, Fisher scored perfectly for both of his routines. The man barely seemed to break a sweat. So while yes, I secretly wanted Stirling (the underdog of my heart) to win in the end, there's really no denying that this season belonged to Fisher. So go forth, young champion. Enjoy your victory. And maybe do some more Broadway shows.