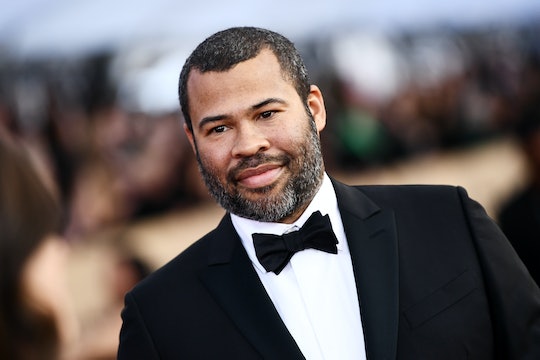 Jordan Peele’s Reaction To His Oscar Nomination Is Seriously Perfect

Get Out, a $5 million movie from late February — a movie from a black, first-time writer and director — was nominated for a Best Picture Oscar on Tuesday. And Jordan Peele's reaction to his Oscar nomination is spot on. Peele tweeted a GIF of the film's star Daniel Kaluuya crying from a scene in the movie, which is certainly an appropriate response.

Get Out is the earliest Best Picture nominee from this year's Oscars in more than two decade since Silence of the Lambs' opening in 1991, according to Forbes. And Peele is only the third person ever to receive a Best Picture nomination and director and writing nods for his first film as a director — after Warren Beatty with Heaven Can Wait in 1978 and James L. Brooks with Terms of Endearment in 1983, according to a tweet by BuzzFeed reporter, Adam Vary.

It has been nearly a decade since the Academy of Motion Pictures Arts & Sciences expanded the number of nominations for best picture from five to a possible 10 films, in a move meant to inject more blockbusters into the Oscar mix and generate more excitement around the telecast

As Variety reported, it's been roughly 10 years since the number of nominations for the Best Picture category doubled, from five to up to 10. Doing so was "meant to inject more blockbusters into the Oscar mix and generate more excitement around the telecast," as Variety explained. But that hasn't quite happened until now. And after 2008's The Dark Knight failed to get a nomination, viewers grew concerned. But Get Out's nomination captures the zeitgeist of the original reasoning for the expanded category.

Get Out is a deserving film — a social thriller that is both universal and specific. It's the story of a man (Kaluuya) meeting his girlfriend's (Allison Williams) family for the first time. Things go awry, not in the funny sense, but in the racist sense — it's also the racial allegory of a black man meeting his white girlfriend's family for the first time. At first, viewers are watching the too-common struggles of an interracial relationship pan out on screen. But as the film progresses, a series of disturbing discoveries unravel in a twisted, unexpected turn.

The movie generated $255 million worldwide off the much smaller production budget for Comcast Corp.’s Universal and co-producer Blumhouse Productions, according to Bloomberg.

Peele took to Twitter to post a GIF of Kaluuya crying in the film, and comments on the thread were encouraging. Twitter users even suggested that Peele earn an Oscar for the Best Oscar Nomination Response. The GIF hits the nail on the head: A black man sits in shock at an unexpected turn of events. He also followed up his tweet with another one that read: "I just spoke to Daniel. You know when you’re on the phone trying to disguise the sound of an ugly cry? I failed at that."

Get Out will be competing with Shape of Water (which received 13 Oscar nominations on Tuesday morning), Dunkirk, Three Billboards Outside Ebbing Missouri, Lady Bird (directed by Greta Gerwig, who is just the fifth woman ever nominated), Darkest Hour, The Post, Phantom Thread, and Call Me By Your Name for the Best Picture award this year, according to USA Today.

The thriller has also received nominations in some other categories, Variety reported. Kaluuya has been nominated for Lead Actor, for one. And Peele's Best Director nomination puts him alongside Barry Jenkins (Moonlight), Steve McQueen (12 Years A Slave), Lee Daniels (Precious), and John Singleton (Boyz in the Hood) as the only black filmmakers to snag Best Director Oscar nominations, Forbes reported. Peele is also up for the Original Screenplay award.

There's a lot weighing on this year's Oscars ceremony following the ongoing "Oscars So White" campaign on Twitter and a cascade of sexual harassment scandals that recently (and rightfully) took down a host of Hollywood directors and actors alike.

The 2018 award show will be hosted by Jimmy Kimmel on Sunday, March 4 and aired live beginning at 8:30 p.m. Eastern Time on ABC.