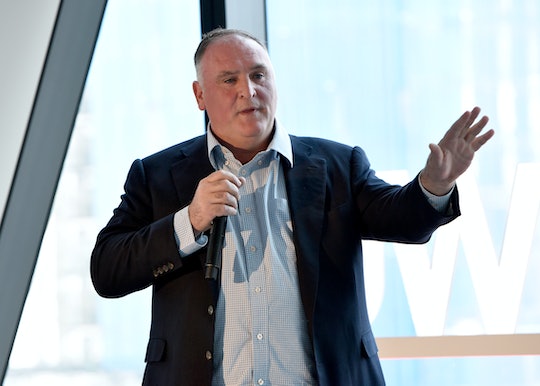 Superstar chefs seem to be getting more involved in saving the world these days, and José Andrés' new kitchen to feed federal workers who need a meal is just the kindness needed right now.

Celebrity chef Andrés, a native of Spain whose top-tier restaurants across the country include Jaleo in Washington, D.C., and The Bazaar at the SLS Hotel in Beverly Hills and Miami's South Beach according to Starchefs magazine, has been involved in the charitable world for some years now, having opened his own non-profit, World Central Kitchen in 2010.

Additionally, Andrés was named the James Beard Foundation's Humanitarian of the Year in 2018 for organizing mobile kitchens to feed those affected by natural disasters in Houston, Puerto Rico, Southern California, and elsewhere, the Washington Post reported. So work to aid others is clearly something that Andrés takes seriously.

Andrés has a personal interest in keeping his community fed, so World Central Kitchen's newest venture likely won't come as the biggest surprise to those who've followed Andrés' work. But it will likely be welcome news for local D.C. workers who make up some of the approximately 800,000 federal employees affected by the government shutdown.

As CNN noted, the current standoff between President Trump — who halted the day-to-day workings of the nation last month over the funding for his proposed border wall, which Democrats strongly oppose — is the longest government shutdown in U.S. history. The outlet noted that federal workers are about to miss their first full monthly paychecks.

Enter chef Andrés. His plan is to open a kitchen on Pennsylvania Avenue later this week, as he explained on Twitter. After all, people need to eat now, whether or not the government is humming along on a certain day.

"I hope it will be a call to action to our senators and congressmen and especially President Trump to make sure that we end this history of America where families are about to go hungry," the chef explained in a video he tweeted on Monday. "We should always come together as 'we the people,' as Americans, bipartisan, Republicans and Democrats, all Americans. World Central Kitchen will be there for all Americans."

Food & Wine added that Andrés' restaurants have already been offering free nourishment to government workers, and that other chefs have followed Andres' charitable example, including Chef Edward Lee, who cooked for the TSA staff of the Louisville Airport, as he noted on Instagram.

Andrés, who shuttered several of his restaurants during the national "Day Without Immigrants" in 2018, according to Starchefs, plans to offer free meals and snacks for federal workers starting Wednesday, Jan. 16, from 11 a.m. to 6 p.m.

"Chef José Andrés and World Central Kitchen announce a Washington, D.C.-based emergency kitchen and café for federal workers affected by the government shutdown. The #ChefsForFeds initiative will offer free meals, available for dine-in and to-go, for federal workers who present a valid government ID and their families," World Central Kitchen told Romper in a statement, adding that takeout meals, salads, and sandwiches will be provided.

Andrés, who, as Eater DC reported, once told the Wall Street Journal magazine that "maybe one day I'd like to be in politics," obviously believes being a superstar of the food world is about more than just winning awards, getting great reviews and impressive accolades, being friends with the rich and famous, or looking good in magazines, but actually about doing some good in a very complicated world.

After all, in 2012, Time listed Andrés among the 100 Most Influential People in the World, the Post profile of the chef added. And, in 2018, Rep. John Delaney of Maryland, told the Washington Post that he nominated the chef and restaurateur for a Nobel Peace Prize. I'm happy to hear about this small piece of good news regarding the difficult situation federal workers find themselves in right now.

#ChefsForFeds will operate starting Wednesday, January 16, and will be open seven days a week from 11am to 6pm at 701 Pennsylvania Ave NW, Washington, DC 20004. Go to www.worldcentralkitchen.org for additional details.