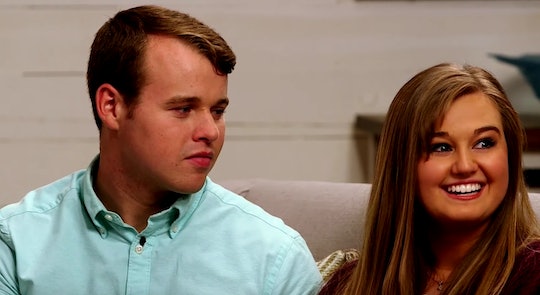 If fans can "count on" the Duggar family for anything, it's to expand. The family of 19 is always growing in one way or another — through courtships, marriages, and babies. And the more weddings there are, the more grandkids there will be ultimately be. During the Season 8 finale of TLC's Counting On, Joseph Duggar revealed "honeymoon babies are a trend" in the family, perhaps hinting that more Duggar grandbabies could be here in the near future.

A lot of things happened during the two-hour finale of Counting On on Monday night. Fans not only got to watch Josiah Duggar marry his wife, Lauren Swanson — and get his first kiss — but they also got to be introduced to John David Duggar's fiancée, Abbie Grace Burnett, for the first time. But a lot of things were also said during the Counting On finale, too. At the end of the episode, for instance, the members of the Duggar family talked about what they wished to see in the future — which was more weddings, babies, and pregnancies, of course. But Joseph Duggar's comment stood out in particular.

"Honeymoon babies are a trend in the Duggar house right now," Joseph said. "You never know, it may happen that Josiah and Lauren..."

"...in about nine months....," his wife, Kendra added, hinting that another honeymoon baby could be on the way.

This not only confirms the suspicions of fans — that the recent Duggar babies have been honeymoon babies (aka babies conceived during their parents' honeymoons) — but that there could be some new baby announcements within the next year.

There was a reason that Joseph and Kendra were the ones to make this comment on Counting On. It's because their baby was rumored to be a honeymoon baby — and they basically confirmed this during Monday's episode of Counting On. Joseph and Kendra married in September 2017, according to People, before jetting off to Greece for their honeymoon. Three months later, in December 2017, the couple announced that they were expecting their first child together, according to People. The perfect timing of their pregnancy led some fans to believe that their baby was a honeymoon baby, according to the Hollywood Gossip. But they weren't the only ones to have a honeymoon baby.

After Joy-Anna Duggar married husband Austin Forsyth in May 2017, according to People, they announced that they were expecting their first child three months later in August 2017. Their honeymoon destination of choice? Geneva, Switzerland. And her conception date was also a very hot topic at the time she announced her pregnancy, according to CaféMom.

Older sisters, Jill and Jessa, are also rumored to have honeymoon babies. After marrying husband, Derick Dillard, in June 2014, according to In Touch Weekly, Jill announced that she was expecting her first child that August — just 60 days after her wedding, according to Us Weekly.

Jessa married husband Ben Seewald in November 2014, according to People, and announced her first pregnancy in April 2015. Although that was five months after her wedding, Jessa told People that she wanted to wait until her second trimester to announce her news. So, she could also have had a honeymoon baby.

The only sibling who doesn't have a honeymoon baby? Jinger Duggar, who married husband Jeremy Vuolo in November 2016, according to People, and announced her pregnancy in January 2018, according to Us Weekly.

Having a honeymoon baby is not solely unique to the Duggar family, of course. Some parents just want to speed up this process right after they get married, and that is perfectly OK. But honeymoon babies do bring their set of challenges, according to Parents. They're born at a time when couples are just starting to figure out each other in married life and how to be parents.

So who could be next to give birth to a honeymoon baby? There are two possibilities.

Josiah and Lauren married on June 30, according to People, and headed out to Vienna, Austria, for their honeymoon shortly after. It has been three months since then — which means, if they did conceive then, an announcement could come any day now.

John David and Abbie are not yet married — they announced their engagement in July, according to TLC. But the Duggars are known for their short engagements — which means that John David could be getting married within a matter of weeks (or months). If this is the case, then a possible pregnancy announcement could be happening some time next year.

Even though Joseph made an off-hand comment at Josiah and Lauren's wedding, it served as confirmation to what fans already suspected — honeymoon babies are, indeed, a trend within their ever-expanding brood.