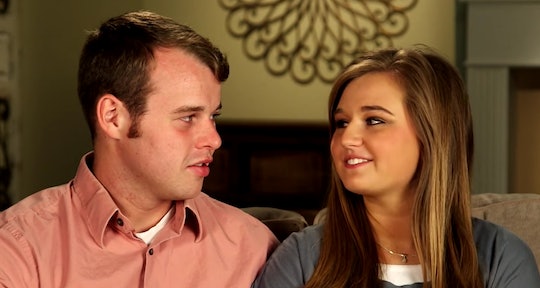 Joseph & Kendra Duggar Are Expecting Their First Child Together

It's only been a few months since they tied the knot in a family-filled ceremony in Arkansas in September, but Joseph and Kendra Duggar are expecting their first child together, and they couldn't possibly be happier about it. The couple revealed their happy news to Us Weekly Monday, and said,

During this season that we are celebrating the birth of Christ, we are so excited to share with you that we are expecting the gift of a child ourselves! Wow, it’s so exciting!!! We’ve both always loved children and seen them as a real blessing from God. It’s so surreal to think of being parents and having our own little one. We cannot wait to see this new baby!

The pregnancy news caps off a pretty big year for the young couple, who confirmed in March that they were officially courting before they got engaged in May (at the wedding of Joseph's sister, Joy-Anna, no less!). Yet as much as theirs may appear to be a whirlwind romance, it isn't exactly out of the ordinary by Duggar standards: Joy and her husband, Austin Forsyth, announced their pregnancy in August almost exactly three months after they tied the knot in May, according to People, and Jill Duggar and her husband, Derek Dillard, announced that they were expecting only two months after their wedding day, according to E! News.

It's also worth noting though that Joseph and Kendra's love story was actually years in the making. During the Counting On season premiere in September, according to People, Joseph discussed his relationship with Kendra, and revealed that he met her five years earlier when he visited her church (Kendra's father is a pastor, according to Us Weekly).

During the episode, Joseph asked Kendra to start a courtship with him in an elaborately planned surprise that started out with an admittedly-unromantic trip to a car auction with Kendra and her father and sister, as well as Duggar siblings Jana and James. On the way home from the auction, Joseph brought Kendra to the Duggar family's former home — "to show her where I started my life and then maybe we’ll be able to start a new portion of life with her there,” Joseph explained — and offered her a promise ring.

The couple got engaged in May, and were married four months later at the First Baptist Church in Siloam Springs — where they also kissed for the first time ever. The two then headed off on a honeymoon in Greece, where Joseph gushed to People about the joys of newly-married life, and said it was "really an amazing feeling to know it's official."

As for Kendra? Well, given the restrictions involved with Duggar-style courtships and engagements — no kissing, no unchaperoned dates, and no full-frontal hugging — it's not exactly surprising that she was just happy to have a chance to spend so much time alone with her new hubby. She said,

One of the most enjoyable things about being married to Joe is just being together so much. I can hug him, kiss him, talk with and be with him all the time. Being with your best friend makes marriage amazing.

Though the couple didn't reveal much about their baby plans, Joseph did tell People after their wedding that he always "dreamed to have a wife and to raise a family in a way that honors the Lord." But they definitely had plenty of encouragement from their family in the baby-making department: in a video message at Joe and Kendra's wedding, Duggar matriarch Michelle said she hoped for "many, many more grandbabies," while Duggar dad Jim Bob told the new couple to "be fruitful and multiply."

From the sounds of it, Michelle and Jim Bob are getting their wish, and now, Joseph will become the fifth Duggar child to announce a pregnancy (so far Jinger is the only married Duggar without a little one on the way.) In other words, the already super-sized fam is set to grow by at least two more members in the coming year — and in true Duggar style, they all seem totally psyched about it.