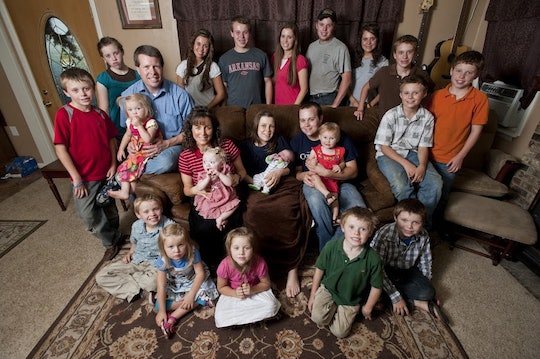 It’s been a rough year for the Duggars, and after watching the first episode of TLC’s Jill & Jessa: Counting On, viewers are starting to see just how rough it continues to be. The spin-off special focuses primarily on sisters Jill and Jessa and their respective journeys into new motherhood, but it also provides an opportunity for Josh Duggar's siblings to share their reactions his scandals and how they were affected.

Things began to fall apart for the family in May after leaked police documents surfaced revealing that eldest brother Josh had molested five girls as a teen, some of whom were his own sisters. Duggar released a statement on Facebook confessing his behavior. But the controversy and widespread public backlash continued even after their once-hugely-popular show, 19 Kids And Counting was cancelled. When the AshleyMadison.com, an online dating site for those seeking extramarital affairs, was hacked in August, it came to light that Duggar had been an active member of Ashley Madison, and Duggar confessed to cheating on his wife, Anna.

Sunday, in an interview with Megyn Kelly, Jill and Jessa Duggar and other family members discussed their side of the story. Last night’s episode was the first time we heard from some of the other Duggar siblings, and their comments are proof that the pain Josh’s actions have caused is still very real.

Jill and Jessa’s younger sister Jinger spoke pretty candidly during the first episode, crying as she discussed how hurtful it was to learn about Josh’s second scandal right when the dust was beginning to settle on the first:

When we heard all this stuff, it was so unreal. We still have trouble comprehending it today. Just the reality of this person we thought we knew, this person that we loved greatly — that we still love — but, just the hard pain that it’s caused. When my mom told us...we were just so overwhelmed and so grieved about what had happened, it almost seems like this person that we knew is no longer the same person.

Jinger’s brothers John-David and Joseph also spoke on camera about their feelings towards Josh, and discussed how learning the truth changed the way they looked at their relationships with their brother, as well as their responsibilities to their family:

"You look at your brother and you...want to think the best about him,” said John-David. “I always wanted to be like him. But one of the toughest things I ever had to tell my older brother was ‘I don’t want to be like you anymore.'"

“[The cheating scandal] blew my mind. I had no idea,” Joseph explained, holding back tears. “I don’t think there’s any way any of us could have known that my brother was leading such a secret life….It broke my heart.”

Following the airing of the show’s first episode, viewers voiced their mixed feelings on social media about whether or not continuing to give the Duggars a platform on TV is appropriate — and given the on-going criticism the Duggars have received since the initial news of sexual abuse, it’s no surprise that many people were against it. But after watching some of the other Duggar siblings discuss their feelings about Josh, it’s clear that the pain and betrayal they are feeling as a result of their brother’s actions runs very deep. Whether or not it’s right for the show to exist, at the very least, it gave people who were hurting a chance to voice their pain, and hopefully, for their sakes, that was helpful.