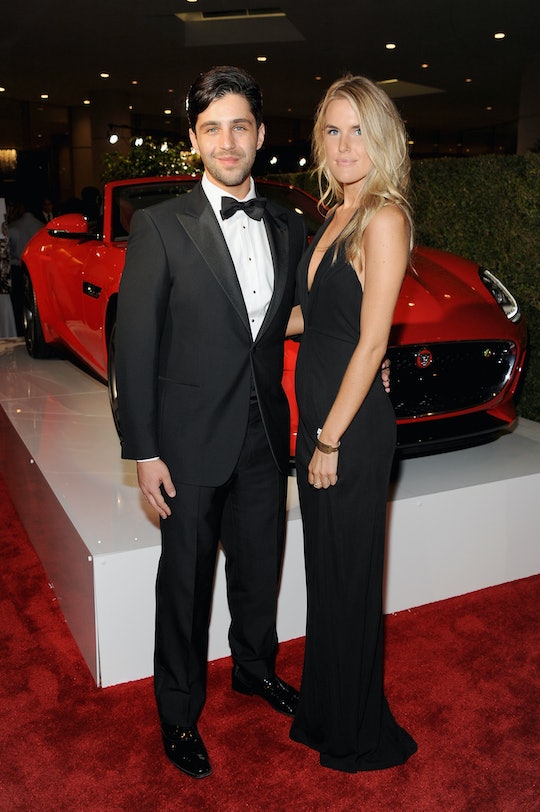 'Tis the season for social media feeds to be plastered with engagements and baby announcements, fa la la la la, la la la laaaa! No, but seriously. Every time I turn around, there are photos of smiling couples showing off either rings or sonograms. Which isn't a bad thing, by any means; babies and marriage are awesome. However, one celebrity couple has decidedly one-upped this life event social media trend. That's because Josh Peck and Paige O'Brien rang in the new year with the birth of their first child.

As E! Online reported, the Drake & Josh star revealed on Monday, Dec. 31 that he and his wife Paige O'Brien had welcomed their first child. The proud new papa took to Instagram to share a photo of his swaddled newborn son — still at the hospital, judging by that familiar blanket and hat — along with the little guy's name: Max Milo Peck. Meanwhile, the new mom shared a photo of their son wrapped in a brown blanket, wearing a white hat, and with a pacifier in his mouth. Judging my the comments, followers of the former Nickelodeon star were absolutely thrilled by the New Year's Eve news. One Instagram user wrote, "Omg!! Soo cute!!! Congrats josh!!!!! ❤️❤️❤️❤️❤️😊😊😊."

Another follower commented, "He about to have the best New Years bday parties."

Yet another person wrote, "Awww! Congratulations!!🎂🎉."

(And there are his eyes!)

Peck and O'Brien — who tied the knot in June 2017, according to People — announced they were expecting their first child back in August, ET Online reported. "Oh baby. Literally, there’s a baby in there," the dad-to-be captioned an Instagram photo of himself and O'Brien cradling her bump. "Love u @paigeobrienn 📸 @stormshoots."

O'Brien shared a similar Instagram reveal with her followers on Aug. 23. Alongside a close-up of her bump, the expecting mom wrote, "We’re havin’ a baby! 📸 : @stormshoots 👶🏻 : @shuapeck."

Although neither Peck nor O'Brien ultimately shared an abundance of Instagram posts concerning the pregnancy, what the mom-to-be did share about her journey was pretty spot-on. On Aug. 28, O'Brien shared a photo of herself with hair messily arranged over half of her face. "Hey guys, if I do that fun thing that pregnant women like to do and ask if I should chop my hair off or get bangs, please say no," she wrote. "Thank you in advance 😘."

"These shoes are made from recycled water bottles.......and now they’re holding all of the water being retained in my feet," O'Brien captioned a photo of herself on Sept. 27. LOL. Looks like those water bottles came full circle, eh?

Her final Instagram bump photo was a mirror selfie featuring a shirt that was having a difficult time containing her third-trimester bump. "Swipe through to see my current fashion inspiration ✨✨," the mom-to-be wrote. Spoiler alert: Photos of bare-bellied Mr. Smee from Peter Pan, Winnie the Pooh, and Barney from The Simpsons all followed. (Yep, this is totally me right now.)

Although Josh Peck and Paige O'Brien happened to share the news on Dec. 31, it isn't yet clear if they officially welcomed their son on New Year's Eve or not. But it's still pretty cool that they got to ring in the new year as parents. Congrats on your precious baby boy, guys; he's sure to make 2019 a year to remember.