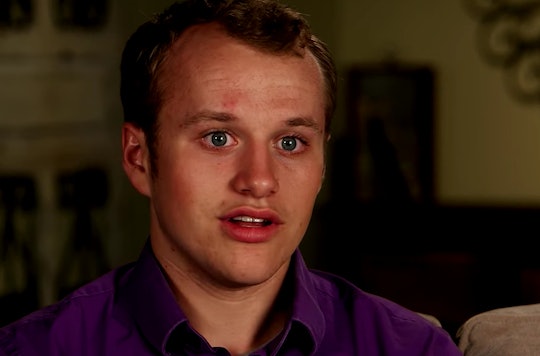 Love is in the air for yet another member of the Duggar clan! True to its name, the TLC series Counting On will soon be adding one more person to its massive brood of 19 Duggar children. That's because the show will likely be featuring a brand new courtship in the not-so-distant future. On Tuesday, Josiah Duggar announced he's officially courting Lauren Swanson, a long-time friend of the family.

If you're having a difficult time remembering where, exactly, Josiah falls in the enormous Duggar line-up, never fear. Let's take a look, courtesy of the old, rapid-fire 19 Kids & Counting intro. From oldest to youngest, there's: Josh, Jana, John David, Jill, Jessa, Jinger, Joseph, *Josiah*, Joy Anna, Jedidiah, Jeremiah, Jason, James, Justin, Jackson, Johannah, Jennifer, Jordyn, and Josie. That makes Josiah, 21, Michelle and Jim Bob's eighth child and fourth son. So who is Josiah's new love interest, you ask? People reported Lauren Swanson, 18, is the eldest of eight children. And if she looks familiar it's because Swanson has been a friend of the Duggar family for years; she even once appeared on an episode of 19 Kids & Counting, according to the publication. (See the couple's sweet courtship announcement video by following the link below!)

“We are overjoyed to begin this new phase of our lives together. Through the years our families’ friendship has allowed us to get to know one another as friends. I can definitely say I have found a great friend … even better than I could have hoped for or imagined,” Josiah told People. “I so appreciate Lauren’s Christlike character and tender heart toward others." Josiah continued:

She brings sunshine into the room and encourages everyone around her. It’s always stood out to me that in every situation, she looks for the one who appears to be sad or lonely and quickly can brighten their day by sharing words of hope, an encouraging scripture, a prayer or even a simple smile with them.

According to People, Duggar added:

It’s truly an exciting time for us, as we take this big step in establishing a relationship, getting to know one another even better and praying together toward our future. We are thankful to God and our families for the love and support we’ve received in starting this new chapter of life and look forward to sharing it with others as the future unfolds.

Unlike his other siblings (and one younger sister) who have courted and continued on to marriage before him, this is actually Josiah's second time courting. Back in 2015, Josiah announced he was courting Marjorie Johnson, according to the Daily Mail. However, the pair split four months later amid the child molestation controversy surrounding Josiah's eldest brother, Josh Duggar.

A few weeks ago Marjorie and Josiah agreed to end their courtship, keeping in step with what they believe the Lord’s will is. Both are thankful for the time getting to know each other, and their families continue to enjoy each other’s company and close friendship. As parents we are very pleased to see two young people searching out their futures with God's will as their first priority!

Although Josiah's first courtship didn't end in marriage, I have a feeling he will be walking down the aisle within a matter of months this time around. (Just like seven of his siblings before him.) Because in the Duggar world, courtship — or "dating with a purpose," as they call it — more closely resembles a traditional engagement. Minus the physical affection of course. (If you remember, the family has strict rules about physical contact before marriage. Side hugs and hand-holding in the presence of a chaperone is about as intimate as it get's, folks.) Similarly, a Duggar engagement means, "Let's hurry up and get married ASAP because I really want to have my first kiss already, and then make a dozen babies." OK, maybe not literally. But based on the family's fast-track tendencies following the announcement of courtships, I'm calling it right now: This time next year, he will be married and expecting his first child.