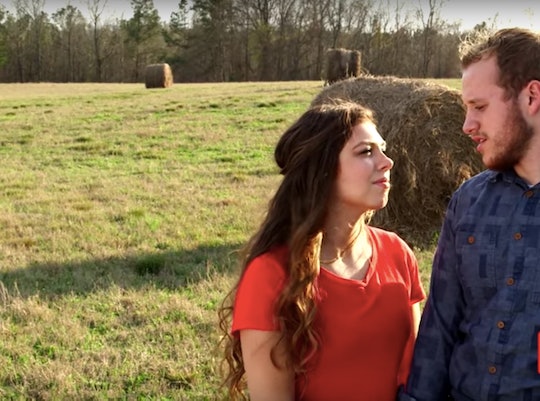 Just about every other week, there's some kid of Duggar news. Whether it be a baby, a courtship, or a family vacation, the large family is constatnly busy. So, that's why it's not really a surprise that *gasp* another Duggar is officially married. Although, it is a bit of a shock that fans didn't know the date of the wedding until it had already happened! So, when did Josiah Duggar and Lauren Swanson get married? The couple had a fast courtship, so it makes sense that their engagement would be swift as well.

But, as it turns out, after getting engaged in March, the two officially tied the knot on Saturday in their home state of Arkansas. According to CafeMom.com, the couple had listed December 31 as their wedding date on their wedding registry, leading many to believe that they were planning on tying the knot on New Years Eve. But, alas, it seems as though that date was a mere ploy to confuse fans. In fact, they got married on June 30, and they even confirmed the news to People, saying, "What a joy it is to be husband and wife! Our wedding day was absolutely perfect!" So, clearly, the two weren't actually planning on waiting until December to become husband and wife.

But, then again, perhaps they were. As CafeMom.com reported, many fans are wondering if Duggar and Swanson had a shotgun wedding, due to pregnancy rumors. Of course, as longtime fans of the Duggars know, these aren't new accusations. In fact, it seems as though almost each and every member of the Duggar family to get married faces some kind of accusation about sex before marriage.

Because the Duggars are so strict when it comes to courtship and relationships, though, it makes sense that people would be suspicious at the timing of marriages and pregnancies. After all, it does seem as though almost every Duggar gets pregnant just exactly three months after their wedding.

But, that doesn't necessarily mean that any of them have had a shotgun wedding, or that Swanson and Duggar had one on Saturday. And even if they did have sex before they got married and therefore had a shotgun wedding to cover up an unplanned pregnancy, it wouldn't be the end of the world.

Most recently, Joy-Anna Duggar and her new husband, Austin Forsyth were slammed with shotgun wedding accusations after they announced their pregnancy so soon after their wedding. But really, it's more likely that once they find someone to court, the Duggars just like to get married as soon as possible. And that makes sense. If you're engaged and know you want to marry that person, why wait too long? Obviously, it's a personal preference, but there's nothing wrong with it.

Again, as most fans are aware, the Duggars kind of have a thing for having a lot of kids. The show wasn't called 19 Kids & Counting for no reason, was it? No. Matriarch of the Duggar family, Michelle Duggar, had 19 children, and while the family has denied being part of the Quiverfull movement, a religious movement in which wives willingly submit to their husbands and try to have as many children as possible, according to People, it certainly seems as if their ideals match up.

But, all of that is beside the point. And since Duggar and Swanson just got married, it's unlikely that there will be any confirmation of a pregnancy any time soon. Well, at least not in the next couple of months. After that, it's really anyone's guess. The Duggar news cycle is mainly babies and marriages, and it seems as though Josiah and Lauren are looking to contribute more to that.

Congrats to the happy couple!