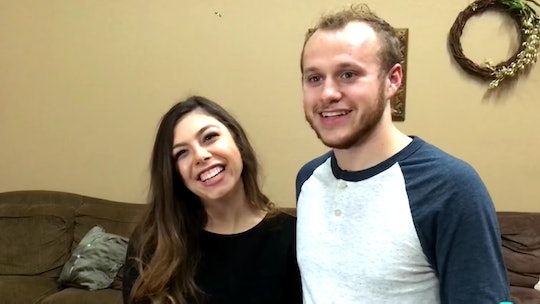 Josiah Duggar & Lauren Swanson's Wedding Date May Have Been Revealed, According To This Fan Theory

When planning a wedding, it's hard to please everyone. The bride wants one thing, the groom wants another, the mothers sometimes seem to think they're in charge, and there's always an out-of-town guest who treats the already-busy couple like their own personal concierge. Apparently, things can get even hairier if you're a reality star, because while it's not even official yet, Josiah Duggar and Lauren Swanson's wedding date may have been revealed and it seems to be riling up some of their fans.

The Duggar family has yet to announce the actual date for their impending nuptials and Romper's request for comment from the Duggar family was not immediately returned. But, a Facebook fan page called "Duggar Family News: Life is not all pickles and hairspray" claims that a source says the plan is for June 30, as CafeMom reported. And that sounds like a lovely plan, although granted, I'm not sure what the temperature gets up to in Arkansas that time of year.

But, fans aren't complaining because of the weather; they seem to be rather upset that the alleged wedding date coincides with the upcoming births of two Duggar babies, who are expected to arrive around that time. As such, some fans seem concerned that the expectant Duggars — Jinger and Kendra Duggar — might miss the wedding or have to potentially sit through a ceremony either while very pregnant or very soon after giving birth.

"So they're seriously gonna make Kendra attend and possibly be in a wedding about a week after giving birth?" one fan commented on the Facebook pafe, adding that Jinger would likely have to drive, as air travel is often prohibited during the final weeks of pregnancy. "I'm sorry but if it's true, it's completely selfish."

The Duggars don't always reveal their due dates, but there is a little insight into when the babies might be expected. It appears that there is an Amazon baby registry for Joseph Duggar's wife, Kendra, and it lists her firstborn's arrival date as June 17. If both dates are accurate, and everything goes according to plan, that's a little tight, sure, but she could probably at least sit through the ceremony. She might even welcome a break from the baby after a couple of weeks, who knows?

Meanwhile, Jeremy Vuolo might have accidentally revealed his wife, Jinger's due date with their first child. He's the pastor of Grace Community Church in Laredo, Texas, and the bio page for the church's website proudly states that he and the Duggar family's sixth-born "are expecting their first child in July of 2018." If that's the case, she could be super pregnant on June 30, depending on exactly when in July that baby's supposed to come.

Adding another wrinkle to the scheduling conflict, Duggar births are typically a family affair, with mom Michelle Duggar and a gaggle of her older daughters nearby during a home birth, if they choose to deliver that way. That could leave quite a few members of the wedding party with some tough choices.

Really, though, when you're one of 19 kids, 12 of whom are now adults, six of whom are married, and four of whom already have kids of their own, is there any date on the calendar that won't interfere with someone's plans? That's not even taking into account their parents, aunts, uncles, grandparents, cousins, and... what about their friends?

It's not unheard of for Duggars to have pregnant bridesmaids at their weddings, either; Joy-Anna Forsyth was pregnant at Joseph and Kendra's wedding last September and Jill Dillard was eight months along at Joy-Anna's wedding four months prior to that.

And after all of those excuses, I still need to point out that there's not really any credible evidence that the wedding really is scheduled for June, anyway. Of the three wedding registries that appear to be Josiah and Lauren's, only one remains active: Bed Bath & Beyond, which currently lists Dec. 31 as their wedding date, though that's likely a placeholder. Their alleged registries on The Knot and on Amazon, which both listed an unspecified date in August, have since been taken down. So as Duggars tend to do, Josiah and Lauren will likely update fans when they actually have a wedding date set.