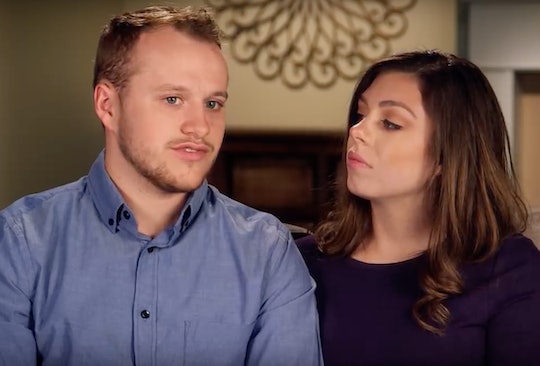 The Duggar family is facing an unexpected hardship, but they've got an excellent support system in their enormous family and loving network of fans. Over the weekend, Josiah Duggar's wife Lauren thanked moms for sharing their "angel baby stories" after she suffered a devastating miscarriage last year. Lauren said in an Instagram post that hearing other moms' experiences helped her through this tough time and undoubtedly the "many other women who have gone through the same trials."

On Sunday, Lauren and Josiah shared a photo of a framed wedding picture sat atop a piano, along with a heartfelt caption about the miscarriage, which they first went public about this past February, as Us Weekly reported. The 19-year-old admitted in her post, "It's easy to share those happy times in our lives, but sharing something hard, like losing a baby can be like putting salt to a wound."

The caption continued as Lauren thanked everyone who shared their own stories with her. "I know by y'all sharing your stories it has not only helped me, but many other women who have gone through the same trials," Lauren wrote on Instagram, concluding with a Bible verse: "He healeth the broken in heart, and bindeth up their wounds."

Lauren suffered a miscarriage in October, according to E! News, and the couple shared the heartbreaking news in a video shared by TLC. In it, Lauren and Josiah appeared arm-in-arm, standing outside as they discussed the tragic loss.

"A couple months ago, we found out that we were expecting, but suddenly thereafter, we lost our baby," Lauren said in the TLC video, adding that they wanted to share their story because "nobody really talks about it," as People reported. "We just wanted to let y'all know that you're not alone," Lauren added.

The couple also shared details about their hardship on Instagram. In the caption of a photo of the two of them together posted in February, Lauren and Josiah wrote, "At first, we kind of wanted to stay quiet about the news, but knew that since everyone is anticipating for us to announce that were [sic] having a baby, we felt like it was time that we told everyone that our first and only baby is in heaven."

The gut-wrenching caption also touched on their "expectations of setting up a baby room, hearing the heart beat, feeling the baby's first kick." In closing, Lauren and Josiah said, "We greatly appreciate your prayers as we go through this hard time!"

After the couple shared their news, Josiah's sister Jessa Duggar shared a message about Lauren's experience, also in a post on Instagram. According to Us Weekly, the 26-year-old, who is currently pregnant with her third child, shared a photo of herself and her growing bump, revealing in the caption that she and Lauren "shared the exact same due date." Jessa noted in her caption that she was "feeling an exceptional amount of grief over my brother Josiah and sister-in-law Lauren's loss."

"Pregnancy — such a precious gift, and definitely not something I take for granted," she said in her Instagram caption before revealing that she and Lauren "have cried so many tears, both together and apart."

Jessa added, "My heart aches for them. I weep when I think of how difficult it must be for her to see me pregnant in the very stages where she would've been — right up through the baby's due date."