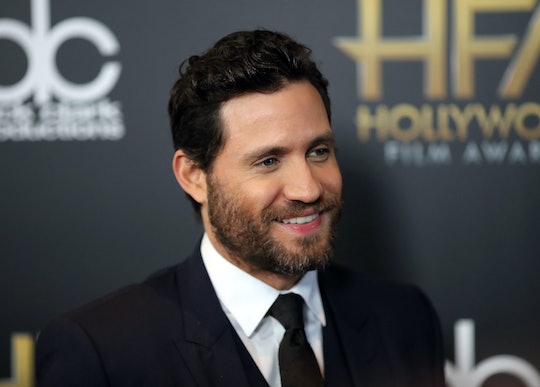 Here's more reason to be excited about Joy this winter movie season. Earlier this week, actor Edgar Ramirez spoke about feminism while appearing on HuffPost Live to promote his role in Joy, the biographical comedy/drama about Joy Mangano, i.e. the woman who invented the "Miracle Mop." (Also known as the film that is attracting awards season buzz for the one and only Golden Globe nominee and fellow feminist Jennifer Lawrence.) The actor, who identifies himself as a feminist, explained that in a "macho normative society where so many things are still so difficult for women," he was drawn to Joy because it features a strong woman as its lead character.

His words are important ones to ingest. And there are many other men who should pay attention to how important it is to support the ideals of feminism:

That said, Ramirez did acknowledge no matter how mindful men are of women’s issues, there are some things they will not, and cannot, understand:

I’m a feminist so I try to be, to exercise the sensitivity and understand the subtleties of being a woman in this world but still there are things we cannot see...we’ll never know.

Wow! How refreshing to see someone who is not a "angry, male-hating female" (you know, as us feminists are often labeled) shedding light on this issue. At any rate, here are five other male celebrities who have taken a similar stance:

Like Ramirez, John Legend believes men should be feminists. In 2013 he said:

All men should be feminists. If men care about women's rights the world will be a better place...we are better off when women are empowered – it leads to a better society.

Comedian Simon Pegg has become an advocate (of sorts) for women’s rights. He was a proud supporter of the #HeForShe campaign, he encouraged his Twitter fans to follow @EverydaySexism, a Twitter account which serves as a collective “documenting experiences of sexism, harassment and assault to show how bad the [really] problem is," and he, in general, uses his sense of humor to instill “stupidity awareness” in others.

While this video may say it all — seriously — Joseph Gordon-Levitt also said on The Ellen DeGeneres Show (2014):

Much like Pegg, Aziz Ansari uses his comedic persona advantageously. On The Late Show With David Letterman Ansari explained feminism, in its most basic form:

And Ansari didn't stop there:

You're a feminist if you go to a Jay-Z and Beyoncé concert and you're not like, 'I feel like Beyoncé should get 23 percent less money than Jay-Z.' ... Also, I don't think Beyoncé should have the right to vote and why is Beyoncé singing and dancing? Shouldn't she make Jay a steak?'

In 2011, the Hamm spoke openly – and honestly — about traditional gender roles. Though he did acknowledge the progress we (as a society) have made in this arena, he also made it clear that we still have a long way to go:

Men ruled the roost and women played a subservient role [in the 1960s]. Working wives were a rarity, because their place was in the home, bringing up the kids. The women who did work were treated as second class citizens, because it was a male-dominated society. That was a fact of life then. But it wouldn’t be tolerated today, and that’s quite right in my book ... people look back on those days through a thick veil of nostalgia, but life was hard if you were anything other than a rich, powerful, white male.

And for those of you who do not believe sexism is still a problem, I leave you with this. (Thank you, Jon Stewart!)