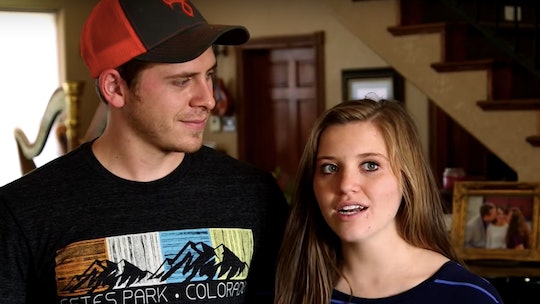 It looks like yet another Duggar is "counting on"! Which makes sense, considering that's the name of their TLC series. (Not to mention, Michelle and Jim Bob Duggar ended up with a whopping 19 children.) But who is sharing the baby news this time, you ask? It turns out Joy-Anna Duggar is pregnant with her second child — and the announcement is just precious.

As Us Weekly reported, the Counting On star took to Instagram on Wednesday, May 1 to reveal the happy news. Alongside a photo of Joy embracing Austin piggy-back style while holding a sonogram, the caption read, "Some of you have guessed, some of you had no clue... November, 2019 Baby Forsyth #2 is Due!!👶🏼❤️ Cannot wait to meet this new little one! Gideon is going to be such a great big brother!!"

The Forsyths' followers were quick to offer up words of congratulations. "Congratulations!!! So excited for y’all!!!," sister-in-law Lauren Duggar wrote.

Another Instagram user pointed out, "You, Jessa and Kendra pregnant at the same time...I have a feeling this will be the year of the girls!"

Take a look at the sweet announcement for yourself.

The Forsyths welcomed their first child, Gideon, in February 2018. And it looks like they're about to have two under 2 by the time the end of the year rolls around. “Our favorite math is addition and we are very excited to share that the Forsyth family is adding a member!” the couple told Us Weekly on Wednesday. They continued:

Marriage and being a mom and dad to Gideon has already far exceeded our expectations. We are looking forward to loving another little one and seeing what special dynamic he or she brings to our family. Table for 4 sounds perfect!

While everyone is clearly excited for Joy-Anna and Austin, this pregnancy didn't necessarily come as a huge shock. That's because pregnancy rumors started flying in March after Joy shared a series of photos of herself wearing a suspicious dress, according to Cheat Sheet. "Spring is just around the corner... Annnddd I can’t wait!!!!🌤🌳," Joy-Anna wrote alongside an Instagram post featuring three pictures of herself wearing a long-sleeved, floral gown. "Love this spring dress from my friend at @mountainaireboutiqueIf your looking for modest, cute, & affordable clothes, go check it out!!"

"Are u pregnant cause when I looked up this dress it said room for growing belly thru pregnancy, one follower wrote. "I was going to order but didn't realize it was maternity dress lol."

Another person commented, "Dress is part of the maternity line. Definitely pregnant."

So yeah. Plenty of fans kind of saw this pregnancy announcement coming. (Which isn't necessarily a bad thing.) If you ask me, Joy and Austin's news is actually pretty darn exciting — considering we seem to be in the midst of a Duggar baby boom. As ET Online reported, Joseph and Kendra Duggar announced just a couple weeks ago that they were expecting baby number two.

Meanwhile, it was revealed that Anna Duggar is pregnant with her sixth child less than a week ago, according to People.

And of course, Jessa and Ben Seewald are expecting their third child. They announced the news in January, according to Today.

That's a whole lotta Duggars. One thing's for sure, though: With all of these babies on the way, TLC's Counting On will have plenty of subject matter for future episodes. I wonder if there are even more pregnancy announcements — or maybe even courtships — on the horizon for the Duggars? I guess fans will just have to tune in/keep their eyes peeled on social media to find out.