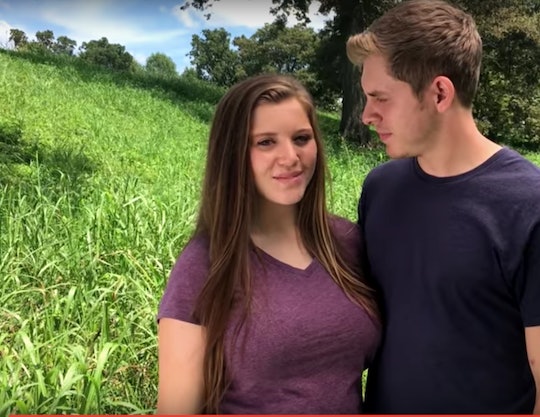 While the Duggars are known for many things, perhaps one of the family's most defining features is their dedication to having as many babies as possible. And now, these Joy-Anna Duggar pregnancy updates will get you so excited about the 20-year-old's first child, because she seems totally ready to tackle motherhood. Obviously, fans of the Duggar's previous reality series, 19 Kids and Counting, and their current show, Counting On, know that the Duggar family has very strict rules when it comes to dating, courtship, and marriage, one of which is that their children should never have sex before marriage — and once they do they shouldn't be using birth control.

So, it rarely comes as a surprise when one of the Duggar children announces a pregnancy so soon after their wedding day. And while many fans were quick to point out that the latest Duggar to announce her pregnancy, Joy-Anna, seems as though she and her now-husband Austin Forsyth might have jumped the gun a little bit, the updates that she's posted to her social media accounts have made it clear that that isn't the case. And what's more, the newlyweds have been keeping their fans updated about Joy-Anna's pregnancy, and it seems as if they can hardly wait to meet their little one.

Their First Announcement Hinted That They Were Pretty Far Along

In the couple's Aug. 30 Instagram post announcing their pregnancy, they wrote that they were so excited about having a baby, as it's something that they've both looked forward to for so long. And then, they gave a little update about how far along they were, writing:

The baby has arms, legs, fingers, and toes. It has a beating heart and brain waves. The baby responds to touch and is already right- or left-handed. The baby has its own unique fingerprints, which are different from anyone else's. All organ systems are in place!

Now, looking at the couple's caption, it seems that at the time of the post, Joy-Anna was at least 10 weeks along. According to BabyCenter.com, at 10 weeks the baby has arms, legs, fingers, eyes, a heart beat, and their organs are beginning to function.

But Their Second Update Is Even More Telling

In an Oct. 1 post of her growing pregnancy bump, Joy-Anna shared that "It's already about the size of a bell pepper and weighs around half a pound!!!" And, a quick Google search reveals that when a baby is the size of a bell pepper, it usually means that the mother is about 18 weeks along, according to BabyCenter.com. So, with that math, it can be conclusively assumed that Joy-Anna's due date is sometime in February.

Of course, this post from the couple earned some hefty criticism as they also shared a pretty strong anti-abortion message, with a photo of baby feet and an overlay that reads, "Life offers no guarantees, but abortion offers no chances."

Sources Say She's Planning To Have A Home Birth

While Joy-Anna hasn't said anything about her birth plan herself, there are plenty of rumors out there that suggest she might be planning on having a home birth, like many others in the Duggar family. Joy-Anna's mother, Michelle, as well as her sisters Jill and Jessa, have all had home births. This would of course make sense, considering how the Duggars like to take alternative routes to medicine and other modern ways of thinking.

However, Joy-Anna herself has yet to confirm this news, so it's important to remember that this is all still mere speculation.

But Some People Think She's Already Given Birth

Now, this is a pretty thin rumor, but based off of Joy-Anna's recent social media presence and the lack of photos of herself, some fans are wondering if she actually already gave birth. Additionally, there's a photo floating around of Joy-Anna at an event where some fans think she looks noticeably thinner. But, the official story is that she's due in March, and that's what the family seems to be sticking to.

But really, Joy-Anna and her husband, Austin Forsyth, are totally entitled to keep their pregnancy as private as they like. Just because they're reality television stars doesn't mean they owe anyone anything.