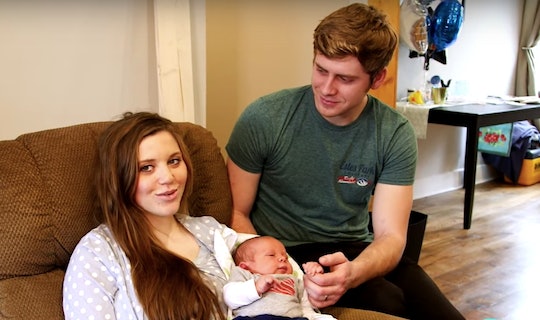 After 20 long hours of labor and an emergency C-section, Joy-Anna Duggar and her husband Austin Forsyth welcomed their new baby boy, Gideon Martyn Forsyth, on Feb. 23. Almost a month later, Duggar revealed her scary birth experience on Counting On. While things didn't go quite as planned, both mom and baby are doing well — and that's all the really matters.

During Monday night's one-hour special episode of Courting On, Duggar detailed her birthing experience and the days before it. She explained that while her pregnancy was relatively easy — no morning sickness and few food aversions — she did struggle with new emotions and hormonal changes that were unfamiliar to her as a first-time mother. Fortunately, she had a lot of support from her husband. "Austin’s been very gracious with me," she said, according to a YouTube video of the episode. "Because I feel like I’ve been on an emotional roller coaster and he’s supported me and encouraged me.”

The closer she got to her due date, the more uncomfortable that she became — which is completely normal, of course. There's nothing cozy about carrying around a fully formed baby human, and you can forget about getting any decent sleep. By the end, she explained that she was “just ready to have this baby.” All throughout her pregnancy she planned on having a home birth.

In the episode, Duggar detailed her reasons for wanting to have her baby at home, according to People:

I decided to have a home birth, just because I know that it’s more comfortable being at home. I really wanted to at least try it, and we’re only about 30 minutes from the hospital, so it’s not too bad in case of an emergency or a change of plans.

Her willingness to be flexible paid off. Those plans changed after more than 20 hours of laboring at home, when Duggar's midwife determined that her baby was breech, according to People. From there, she was rushed to the hospital for an emergency C-section. Roughly four percent of babies are in the breech position by the time they reach full term, like baby Gideon was, according to Fit Pregnancy. "Breech" describes when the baby is positioned feet-first instead of head down and the debate over whether to deliver these babies vaginally or via C-section is a heated one.

Most doctors in the U.S. choose to deliver breech babies via C-section, and for good reason. A 2000 study known as the Term Breech Trial (TBT) determined that there were fewer newborn deaths when breech babies were delivered via planned C-sections, as opposed to vaginal deliveries. Since then, most American doctors are trained to turn to C-sections when babies are breech, according to Fit Pregnancy.

But C-sections are not without their risks. Moms with breech babies have a couple of other options before giving birth that could help them change their babies' positions if they aren't too keen on getting the procedure, according to Family Doctor. First, there is an external cephalic version, the procedure that involves lifting and turning the baby from the outside. Moms can also wait it out and see if the baby will change positions on their own. There are also natural options, such as music and temperature stimulation that some people believe helps motivate the baby to move, according to Family Doctor. If none of this works, moms have to decide whether to go to the C-section route or find a doctor who supports vaginal delivery for breech babies.

Duggar's baby arrived via C-section at 3:39 p.m. ET on Feb. 23, weighing 10 pounds, 3 ounces and measuring 22 inches long, according to the family's blog. Duggar’s parents Jim Bob and Michelle, and Forsyth's parents Terry and Roxanne were there with the couple when Gideon made his arrival, according to In Touch Weekly. Despite the change of plans, Duggar shared on Counting On that the family is doing well. "Love you guys, thank you for your prayers.," she said, according to Cafe Mom. "We are so happy that our little one has finally arrived and we’re parents.”

The story of how baby Gideon came into the world is a testament to the importance of remaining flexible about your birth plan. As long as mom and baby are healthy, not much else matters.