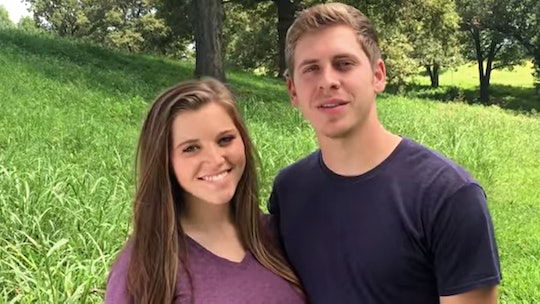 Guys, there's a new Duggar baby in town! I would say, "surprise!" but let's be honest: By now, fans of the 19 Kids & Counting family pretty much expect a regular stream of birth announcements. However, the latest birth is actually a first for this particular couple. That's because Joy-Anna and Austin Forsyth are officially first-time parents. Early Monday afternoon, People reported the Counting On couple had welcomed their first child together on Feb. 23. Now, Joy-Anna Duggar has shared sweet photos of her baby boy on her shared Instagram page with her husband, and fans are so excited.

Joy-Anna and Austin's new little bundle of joy was born at 3:39 p.m. this past Friday — and he weighed in at a whopping 10 pounds, 3 ounces, and measured 22 inches long. (Whoa, baby!) “We are blessed beyond measure with the arrival of our son, Gideon Martyn Forsyth,” the proud new parents told People. “Looking at our child for the first time was such an incredible moment! God is so good, and we are so thankful.”

Both mom and baby are doing excellent, the publication reported. A photo of the new family — with Joy-Anna cradling baby Gideon and Austin wrapping his arms around both of them — was shared along with the initial announcement.

A few hours later, though, the new mama took to Instagram to share even more adorable photos with her followers. If you scroll through the shots, you'll see the original family photo, followed by a sweet picture of mother and son, a close-up of Gideon making a silly face, and shot of dad Austin with his little guy. Fans were quick to bombard Joy-Anna's post with their excitement, with many also taking note of his impressive birth stats. "Congratulations! He's so handsome. What a blessing," one Instagram user commented.

Another person wrote, "Congratulations to both of you! Such a handsome little (not so little) fella."

Yet another Instagram user chimed in with, "Congrats on a big baby boy who is adorable. Way to go mom and dad!"

Let's take a look back at Joy-Anna and Austin's journey to parenthood, shall we? The duo had actually been friends for 15 years before entering into a courtship, People reported. And things only sped up (drastically) from there. The couple became engaged in March of 2017 and tied the knot just three months later in June, E! News reported. Then in August, Joy-Anna and Austin announced they were expecting their first child with an adorable video. "Before we were even married, we were praying that god would give us kids, and we're so thankful that he has," Joy-Anna said in the announcement clip. "I'm really looking forward to seeing what the baby looks like."

The quick turnaround between Joy and Austin's wedding and pregnancy announcement — added to the fact that they moved up the date of their wedding ceremony — caused many fans to speculate if they had conceived before marriage. Adding insult to injury, throughout her pregnancy some critics claimed Joy-Anna's bump looked bigger than it "should be." Whatever that means. (Because obviously, every woman's body shows pregnancy in the same, exact way. *Eye roll*)

In case you weren't aware, Counting On returns to TLC this evening, Feb. 26, at 9 p.m. (ET,) according to In Touch Weekly. So I'm guessing little Gideon's birth announcement was strategically released to fans even more excited about the new season. In a teaser showing what's in store next for the Duggars, it seems viewers will get to see Joy-Anna and Austin embark on their honeymoon to Switzerland. And eventually, it looks like the show caught their pregnancy announcement on-camera, too. (Thus, the name of the show.)

Now that little Gideon is finally here, just one question remains: Will his birth be featured on Counting On? The TLC series has showcased both Jill's and Jessa's labors and deliveries, so *fingers crossed* I'm hoping Joy-Anna will allow viewers a special look into her experience, too. Congrats on your sweet baby boy!