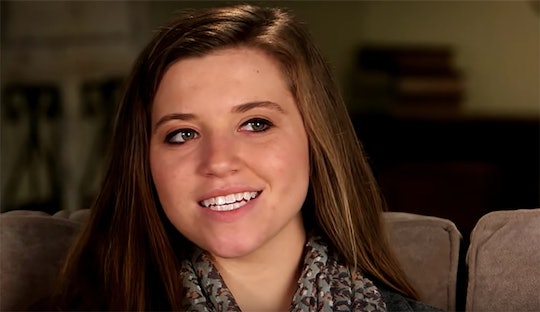 Following the news that Joy-Anna Duggar gave birth to her son, Gideon Martyn Forsyth, on Friday, many Counting On fans took to social media to express curiosity about the delivery. Although Joy-Anna revealed in a video on Monday that she intended to give birth at home, a recent picture shared by her cousin, Amy King, revealed that she *did* give birth in a hospital. Unfortunately, shortly after King uploaded the pic, fans got into a heated debate about whether it was necessary for Joy-Anna to deliver Gideon in the hospital. And early Wednesday morning, Joy-Anna's cousin deleted the photo of her hospital birth before making her public account private. So, what the heck is going on here?

If you're not familiar with King and are wondering how she fits into this social media controversy, she's Jim Bob Duggar's niece. King, who doesn't subscribe to many of the Duggar's conservative values, has appeared on 19 Kids & Counting and Counting On numerous times. And as much as King doesn't agree with many of the Duggar family's rules (she had music and alcohol at her wedding, for instance) she loves her cousins dearly. So, it was no surprise when she took to Instagram on Tuesday to congratulate Joy-Anna on her new addition. "Welcome to the world precious Gideon. Congratulations Joy & Austin," King captioned a snap of Joy-Anna cradling Gideon while lying in a hospital bed, according to Reddit. She used the hashtags #littlechunk and #someoneneedstohaveababygirlsooninthisfamily.

Of course, it wasn't too long before Reddit's Counting On forum, and multiple outlets, caught wind of the photo. Considering the Duggars have never released a post-delivery pic via social media before (Jill Duggar's hospital photos were first released to major publications), it makes sense that King's snap caused such a stir. And personally, I was a bit shocked when I first saw the photo this morning. I couldn't help but wonder if King asked Joy-Anna's permission before posting the pic and whether Joy-Anna was OK with fans seeing her in such a private moment.

Well, I think it's a safe bet my question was answered when King deleted the photo early Wednesday morning. And within minutes of deleting the pic, King switched her public account to private.

So, what would prompt King remove the photo? There are two plausible options.

The first theory is that King didn't ask Joy-Anna before posting the pic. If this is the case, Joy-Anna had all the right in the world to ask her to remove it from social media — every person deserves the right to privacy.

Now, if you're wondering, "why would Joy-Anna care about the post since she lives a very public life?," that's potentially a bit more complicated. Throughout the years, people have speculated that the Duggars feel some shame about hospital births and that it's looked down upon in their fundamentalist community. In fact, the rumors became so intense that Derick Dillard, Jill's husband, felt compelled to speak out following the Cesarean birth of their son, Israel. "She [Jill] had labored for so long. There's no shame in that, there's no shame in not progressing, there's no shame in getting a C-section," Dillard told People.

Of course, there's no telling how Joy-Anna actually feels about her delivery until she opens up about it to fans. What is clear, however, is that the hospital pic has fans divided on home births vs. hospital births. Apparently, some people are upset by the assumption that Gideon's weight (10 pounds) required a hospital birth. The resulting backlash might be the other reason Amy deleted the pic.

"I will probably get downvoted but I don’t get the home birth bashing in this group," One person in the Reddit Counting On forum wrote. "You aren’t risking your baby’s life by having them at home if a real midwife is there." Another person chimed in: "Ultrasounds are wrong all the time on weight, plus there is no reason a bigger baby should be delivered at a hospital..."

Others argued that there's nothing wrong with a home birth unless it's done "safely" or with "licensed midwives."

"No one is saying there’s anything wrong with home births, as long as they are done safely," a fan added to the conversation. "Eg with actual, certified midwives (not Jill)."

"I’d also be interested to hear how she ended up with a hospital birth," someone wrote. "Maybe it was difficult and this will convince the rest of the girls to either go with licensed midwives, birthing centers or hospitals."

Fan debate aside, it will be interesting to see if Joy-Anna decides to speak out on the hospital birth photo in the days to come. Either way, there's a good chance Joy-Anna and Austin want to enjoy Gideon in private for now.