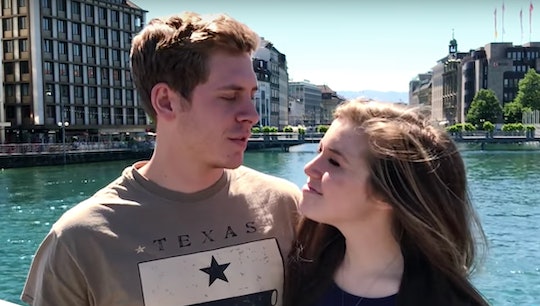 After enjoying their first days of marriage in Switzerland, Austin Forsyth and Joy-Anna Duggar's revealed their honeymoon photos, and fans will love them if they haven't seen them already. Joy-Anna, 19, and her husband, 23, traveled across the country in June, and they told People that they chose it because they knew it was beautiful and Forsyth had wanted to go for a while.

Joy-Anna married her husband in May before their big family and friends at Cross Church in Rogers, Arkansas, according to People. Though her gown was designed by Renee Miller, it also included sweet tributes to her family: the gown included pieces from her mother's, grandmother's, and Austin's mother's wedding dresses, People reported. Joy-Anna and Austin had been friends for 15 years before they got engaged for three months, People reported — and their honeymoon photos prove that their friendship built quite the foundation for a fun relationship.

"I think what I'm looking forward to most about being in Switzerland is the scenery and getting to do the outdoor activities — skiing and hang-gliding," Austin explained, according to In Touch Weekly. He also said that he'd always remember their honeymoon as their first trip out of the country together and hoped to have "special memories."

Joy-Anna also got some advice from her older sisters, Jill and Jessa, before her big day, according to The Hollywood Gossip. "Enjoy being married," Jill said. "Enjoy each other’s company." Meanwhile, Jessa gave the following advice: "I think the honeymoon’s going to be really, really special. Just spending that time together — quality time.”

It certainly looked like quality time. The newlyweds went to Geneva first and then made their way to Interlaken and Zermatt, Switzerland, as well, according to TLC. Joy-Anna said the downtown area of Geneva was "gorgeous." But they didn't only spend their time downtime in the major cities. They were also "somewhere mountainous, enjoying nature with lots of hiking and outdoor adventures," according to OK! Magazine.

It's very clear that the couple loves the outdoors. According to Hollywood Life, the couple planned a joint bachelor/bachelorette party where they went camping. Joy-Anna told cameras in the Oct. 2 episode of Counting On that she had always wanted to go camping because it's something Austin enjoys, and that she couldn’t wait for their "camping and canoeing" party where they'd be "roughing it" together.

Flash forward, and the couple is having a ton of experiences together. While the Counting On stars aren't too active on social media, Austin posted a photo of the two in Israel on his Instagram account after their one-month anniversary, captioned: "Celebrating our 1 month anniversary in Israel! #loveyouforeverandalwaysbabe#seaofGalilee#holyland#GodblessIsrael." It seems like they started traveling quite a bit since their camping extravaganza and their first honeymoon vacation out of the country to Switzerland.

"So hard to believe you guys are married now, BUT, so happy for you both," one fan commented on the post, adding "May the Lord bless you both and strengthen your love for each other every day." Meanwhile, others suspected the Joy-Anna was pregnant. One wrote, "Look like you're hiding a baby bump."

In August, People announced that the reality TV star was indeed pregnant. "We’re so happy and thankful to announce that we’re expecting a baby!" Joy-Anna told People. "Every child is such a precious gift from God. I’m most looking forward to watching Austin as a dad and raising children together with him."

She's due rather soon, too. In Touch Weekly reported that her rumored due date is some time in February, so fans might get to meet a new addition to the family on this season of Counting On. While Duggar family followers await the baby on board, take a look back through their honeymoon when it was just the two of them.