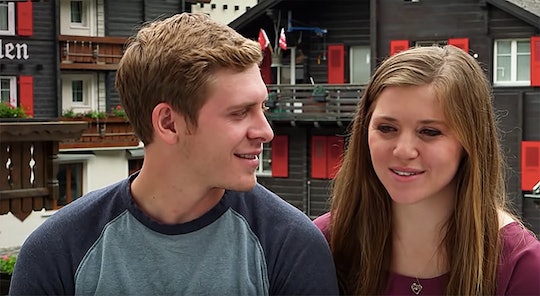 Counting On fans have long wondered where Joy-Anna and her husband Austin Forsyth have been living since the birth of their first child, Gideon, in February 2018. Well, fans don't have to wonder any longer because Joy-Anna Duggar's house tour answered a lot of questions and then some.

Joy-Anna took to Instagram Wednesday to address fans who've asked about her living whereabouts, noting that it was time for her to show them around. The video, although short, gives supporters a firsthand look at her life at home with her family. And I don't want to give everything away just yet, but all I'll say is Joy-Anna and Austin are pretty skilled at making small spaces homey.

Now, just so there isn't any confusion, this appears to be a different RV than the one they started off in shortly after Gideon's birth, noting they've been in it for about one year. And it's definitely an upgrade, in my humble opinion.

The video starts with a quick look at the outside of the the RV (which she says is a 32-foot long, fifth wheel camper) and moves along to a photo tour of the interior which is absolutely charming.

There's a good size kitchen given the floor plan and everything from the cabinets to the walls are painted a fresh white. There's hardwood floors throughout with one private bedroom and a queen size futon in the living room. Lots of natural lighting flows in from the windows, and there's even some pretty hanging plans in the living room area.

Although it's unclear where baby Gideon sleeps, there definitely appears to be room. The whole place is decorated in neutral tones, which is an excellent design choice made to make small spaces look bigger, according to House Beautiful.

The only downside? Joy-Anna said it's pretty small and the kitchen isn't as big as she'd like, but she still believes it "fits her family perfectly."

Fans were quick to compliment the family on their home, offering everything from congrats to questions about where they shopped for home goods.

One Instagram user wrote, "It looks lovely. Once we went camping in our RV for the first time I realized how little you actually need to live and be happy (plus cleaning is a breeze)."

This is definitely an upside when you're dealing with life as a new mom, btw.

Another fan said, "This is the cutest camper I’ve seen! Heck I’d live in that."

One even had a suggestion for Duggar and Forsyth in the future, "Wow! It looks amazing! I didn't expect the inside to look like that! Great job! Y'all should go on HGTV tiny homes and help ppl get great spaces like y'alls!"

As fans already know, Duggar suffered a miscarriage five months into her pregnancy in July, and there's no telling if the family would have moved when the baby arrived. Chances are it would have been too cramped with four people to one RV.

For now, the Austin and Joy seem to be happy right where they are. If their family continues to grow, and chances are good that it will, then they'll have to rethink things a little. Until then, they're making RV life look pretty good.