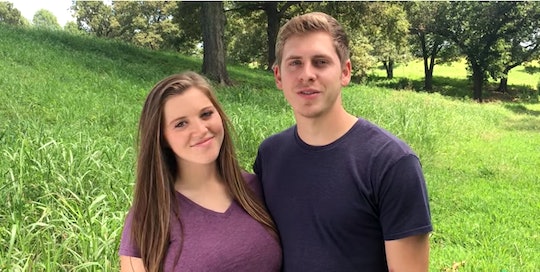 Those who are familiar with Michelle and Jim Bob Duggar — and their whopping 19 children — probably know they live their lives a bit differently than the average family. Between their family rules about dressing modestly, carrying out traditional gender roles, homeschooling, entering into courtships, and more, the Duggar's ultra-conservative lifestyle has been showcased on TLC for quite a few years now. By now, many of their adult children are married off and starting families of their own. And it's become clear from their series, Counting On, that the Duggar siblings also approach childbirth in similar ways: With having a home birth as their preferred method of delivery. As it turns out, though, Joy-Anna Duggar's husband Austin Forsyth didn't want to "risk mom and baby's life" for a home birth.

In a clip from Joy-Anna's recent birth special, she and her husband, Austin, are discussing their birthing options with a midwife. "Have you decided whether you want to have a water birth or not?" their midwife asked. "Do you want to use one of my pools?" To that, Joy replied, "I want to have all of the options available. I am not sure." Away from their meeting with the midwife, the couple explained that the plan is to have a home birth — but within reason. "We want a home birth, we're going to try, we’re not going to risk mom and baby’s life,” Austin explained.

“I decided to have a home birth, just because I know that it’s more comfortable being at home,” Joy-Anna went on to explain. “I really wanted to at least try it, and we’re only about 30 minutes from the hospital, so it’s not too bad in case of an emergency or a change of plans."

To me, it seems as if Joy and Austin went into their home birth plan with level heads. While having a home birth was obviously their first choice, they also acknowledged that labor and delivery can be unpredictable — and so they had a back-up plan in place in case of an emergency, as Babble recommends. Still, as with most first-time expecting mothers, Joy-Anna admitted she was anxious about her impending childbirth experience. “I’m just having to remind myself not to let the fears and anxiety things take over and just prepare as best as I can and be flexible at the same time,” she said during the birth special. She continued:

My thoughts right now? If you ask me, I mean, they change. Sometimes I’m like, ‘I’m ready for this, I can do this!’ And then sometimes I’m like, ‘Why am I doing this?’ It changes. But right now, I’m excited and I’m ready and I want to have this baby as soon as it’s ready to come out.

Ultimately, Joy-Anna ended up delivering a healthy baby boy in a hospital setting, Country Living reported. After Joy labored at home for 20 hours, her midwife determined the baby was in a breech position. Joy was then rushed to a hospital, where she delivered her son via emergency C-section. Baby Gideon Martin Forsyth was born on Feb. 23, weighing in at 10 pounds, 3 ounces, and measuring 22 inches in length.

Avid Counting On fans might remember a couple of Joy-Anna's sisters have also found themselves in similar situations when delivering their babies — at least as far as winding up in a hospital is concerned. For both of her sons, Jill Dillard labored at home for a long time before having emergency C-sections at a hospital, Us Weekly reported. And although Jessa Seewald delivered her first child at home, she was rushed to a hospital soon afterward because of excessive bleeding, People reported. It's unclear at this time if Jinger Vuolo give birth at home or in a hospital.

Whether you love 'em or hate 'em, it's difficult to deny the Duggars do things their own way. And for every Duggar couple so far — except for Joe and Kendra Duggar, it seems — that has meant opting for having a home birth as their first choice. However, as many parents have found out for themselves, birth plans don't always go as expected. The way I see it is as long as couples go in with an open mind and a detailed back-up plan, then more power to them for attempting a home birth.