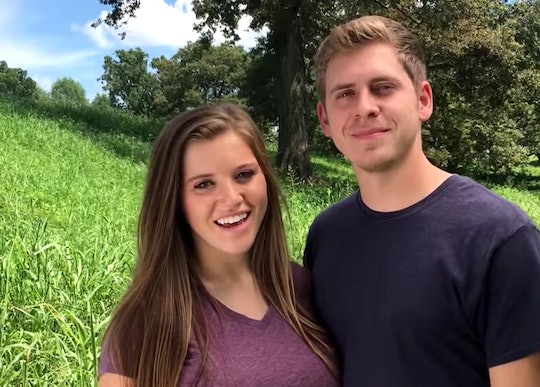 Joy-Anna Duggar's Interviews About Her Kids Hint That She Wants A Large Family, Too

When most people hear the last name Duggar, they probably think, "Oh, yeah. That's that family with a million kids!" Because with a whopping 19 children, Michelle and Jim Bob have definitely made a name for themselves through the years — especially with the most recent 19 Kids and Counting. Now that many of their children are grown, married, starting families of their own, and starring in their own spin-off, Counting On, viewers are naturally curious if the Duggar kids are planning to follow in their parents' footsteps. Joy-Anna Duggar's interviews about her kids hint that she may want a large family of her own.

Joy-Anna and her husband, Austin Forsyth, met as children when his family started attending her family's church, reports People. The pair officially began courting in November 2016, and then announced their engagement that following March. After a three-month engagement, Joy-Anna, 19, and Austin, 23, exchanged vows in May, according to the publication. But the happy news didn't stop there! The newlyweds took to Instagram in August to announce Joy-Anna was pregnant with the couple's first child, reports E! Online. “We’re so happy and thankful to announce that we’re expecting a baby!” Joy-Anna told People. “Every child is such a precious gift from God. I’m most looking forward to watching Austin as a dad and raising children together with him.”

In a TLC video clip, Joy-Anna said, she and Austin have been looking forward to parenthood for quite some time. "Before we even were married, we were praying that God would give us kids and we're so thankful that he has." It's clear the happy couple is excited for the next stage in their lives together — and with 10 younger siblings, Joy-Anna certainly has experience with having babies in the house. “I have a lot of good memories of my mom teaching us and the quality time we spent together, and I’m really looking forward to doing that with my own children. It’s such an amazing thing to be a parent and raise children."

Even though Joy-Anna grew up with a house full of siblings — and oftentimes helped look after them — being responsible for your own children is a completely different experience than helping out with younger brothers and sisters.. The mom-to-be shared that she's already reached out to her older siblings for an inside scoop on new motherhood. "I have already gotten some advice from Jessa and Jill and Megan, Austin's sister, just about good tips to remember," Joy-Ana said in the TLC video clip announcing her pregnancy. "I think I'm going to be asking a lot more questions closer to the time when the baby is almost here." As for what she's most excited about for her pregnancy, it's something that I could definitely identify with when I was carrying my first child. "I'm really looking forward to seeing what the baby looks like," Joy-Anna said. "Especially in the first two year, they grow a ton. And so getting to seem them going form just being a baby, to being able to sit up and begin to crawl and to walk."

With such a quick turnaround between her wedding and pregnancy announcement — coupled with the fact that many people thought Joy's bump already appeared "bigger" than it should have — rumors of premarital sex (a big, no no in the Duggar family) began flying. However, as In Touch Weekly points out, an Instagram post revealing how far along the mom-to-be was at the time proves this wasn't the case. "Can't wait to meet our baby!" Joy captioned the bump photo from Oct. 2. " I got to feel it kick for the first time a few days ago!!! Soooooo amazing!!! It's already about the size of a bell pepper and weighs around half a pound!!!" As In Touch Weekly pointed out, a fetus is at roughly at 18 weeks gestation when it reaches the size of a bell pepper. So if Joy was 18 weeks pregnant on Oct. 2, that would put her due date in February — and therefore the conception date just a few days after their May wedding.

So, will Joy-Anna follow in her parents’ footsteps and have a large family of her own? It certainly looks like that could be the case. “We want as many as the Lord thinks we can handle,” she told People after her wedding in May. “And we are putting it into his hands.” For those who aren't familiar with Duggar lingo, that has traditionally translated to, "Heck yes. We're having all the babies." I have a feeling Joy-Anna will be no exception.