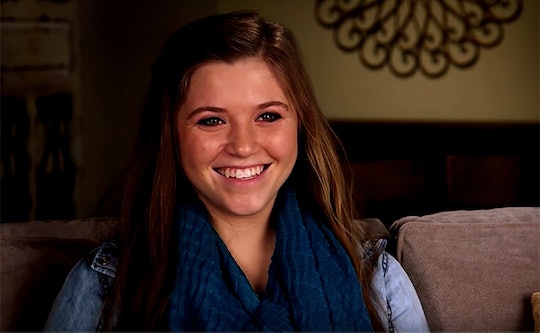 Out of all the Duggar sisters, Joy-Anna Duggar is probably the least active on social media. From sharing an Instagram account with her husband, Austin Forsyth, to only uploading a few pics (if that) a month, it's clear Joy-Anna's isn't too keen on sharing her life with the world. But why is Joy-Anna so social media shy? Well, it might have something to do with the fact that fans seem especially critical of Joy-Anna's choices — especially where it concerns Forsyth and her new son, Gideon. Case in point: Joy-Anna Duggar's new photos of Gideon are sparking a heated debate among fans. Apparently, people aren't thrilled that Joy-Anna seemingly used Gideon to promote a "marriage retreat" at the camp owned by Forsyth's parents.

Ever since Joy-Anna welcomed Gideon in February, she has mostly avoided social media to enjoy her life as a new mom. Aside from Gideon's birth announcement, Joy-Anna has only shared one solo pic of her baby — a sweet post celebrating his 1-month milestone. "Time sure does fly! It’s hard to believe Gideon is already 1 month old. #GideonMartynForsyth," Joy-Anna captioned the March 24 snap, according to Instagram.

And given how rare it is for Joy-Anna to share pics of Gideon, it makes sense that her new batch of photos has fans in a frenzy. Making matters even more exciting is that Joy-Anna shared three shots of Gideon in various poses, including one of the newborn enjoying a pacifier with a stuffed lion attached to it. Sounds incredibly cute, right?

But while you might think Gideon's adorable face is what has fans talking, it's actually his parents' promotion of Fort Rock Family Camp and their upcoming speaking event that's generating a ton of commentary.

"Getting some work done at camp," Joy-Anna captioned the post, according to Instagram. "We have the Spring Marriage Retreat coming up on April 20-22, come hear Austin and I share our testimony. Limited space available, register at www.fortrock.org. #FortRockFamilyCamp #MarriageRetreat #Forsythfamily #GideonMartynForsyth @fortrockfamilycamp."

Although there's a lot to dissect in the caption, it's important to first understand what giving "testimony" means and what the Fort Rock Family Camp is all about. Giving testimony, in a nutshell, is when a person describes the moment they accepted God into their life. I'm not an expert on this topic by any means, but I believe giving testimony is more common for people who initially struggled with religion in some capacity (this is true of Joy-Anna) or for those who found Christianity later in life. So, when you pair the concept of giving testimony with a marriage retreat, I would assume that Joy-Anna and Forsyth will speak about how finding God has strengthened their marriage (or something to that effect).

As for what the Fort Rock Family Camp is, it's a family vacation spot in Arkansas that happens to be owned by Forsyth's parents — Terry and Roxanne Forsyth. The camp, according to its website, is a place for families to "step back in time, slow down and enjoy spectacular beauty any time of the year while fellowshipping with other Christian families."

So, why are so many people annoyed that Joy-Anna and Forsyth plugged their family's business on the 'gram?

For starters, the order of the post's photos is a bit... interesting. Following a cute shot of Joy-Anna and Forsyth posing with baby Gideon in a field, fans are treated to a flyer promoting the couple's appearance at Fort Rock Family Camp. Hmm, did Joy-Anna and Forsyth secretly attend college for marketing? It seems like these two are well aware of the power cute babies possess.

But most of all, some people think it's too early on in Forsyth and Joy-Anna's marriage for them to be dolling out marriage advice. The couple did just get hitched in May 2017, after all.

"Anyone married less than a year has no business "testifying" about marriage," one fan commented on the post. "Talk to me after 10 years."

Another person agreed, writing: "I thought the same thing. Married 5 minutes and 19 years old. I don't think they are in any position to give testimony."

"Don't you think it's a little too early for you guys to be giving advice in a marriage retreat," someone else asked. "I've been married for almost 3 years and been with my husband for 5 and I'm still asking advice from the elderly. Lol."

Others, however, pointed out that you don't necessarily have to be married for a few decades to give testimony.

Everyone encounters God, some realize it & others don’t. They have a huge testimony of being married at a young age, pregnancy & now a sweet newborn! That alone brings challenges. A testimony is to reveal what God has done in their lives!

"Everyone in Christ has a testimony, it doesn’t matter how old you are, it matters how God has worked in you," someone else chimed in.

"Any couple that grows together in Christ and strives to follow Him, has a testimony to share," another person penned. "God will bless a marriage if he's at the center of it."

Testimony debate aside, another angle to consider here is that participating in marriage retreats is how the Duggars potentially earn additional income. And it goes without saying that Joy-Anna and Forsyth have every right to take advantage of their fame for monetary reasons. To each their own, as the saying goes.

Of course, this won't be the last time Joy-Anna's social media account will spark a controversy. For better or worse, people get a kick out of analyzing every decision she makes.