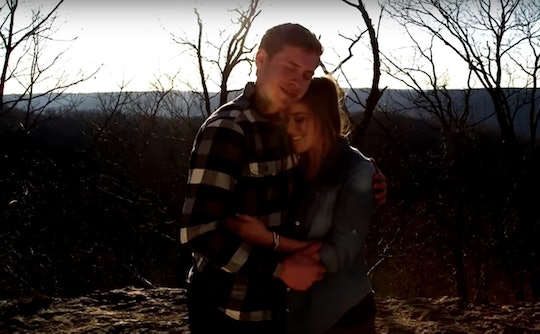 Here's How Austin Forsyth Popped The Question To Joy-Anna Duggar

If you're a fan of the Duggar family, or any of their television shows, you're aware that there's kind of a lot going on at the moment. So, in case you've been a bit distracted with all the pregnancies, babies, and weddings going on, allow me to fill you in on Joy-Anna Duggar's proposal story. Because it was seriously adorable.

Now, if you've seen Joy-Anna's name in the news recently, it's likely because there has been a lot of talk about her pregnancy and exactly when she got pregnant. But, I'll tell you about that later. For now, allow me to recap on how the couple officially started their life together. In March 2017, Austin Forsyth popped the question to Joy-Anna, on an equestrian trail in Arkansas, according to People. But they weren't alone.

Not only were camera crews following the young couple, but Joy-Anna's little sisters, Johannah and Jennifer, were there to chaperone the date. According to People, though, the proposal was also pretty dramatic, even though Austin had wanted the moment to be low-key. As People reported, the two engaged in a full hug before they were officially engaged, a big "don't" for the Duggar family. But, all of that aside, it still seemed like a sweet moment, and definitely one that Austin and Joy-Anna will want to remember.

According to The Hollywood Gossip, Austin took Joy-Anna and her sisters to ride horses for a little while before he asked the younger girls to go on up ahead, and pulled Joy-Anna to a side trail where he asked her a pretty mysterious question. "Do you trust me?" he asked, according to the website's review of the episode. Joy-Anna said yes and then he blindfolded her. Now, before your mind starts to go all Fifty Shades Of Grey on this proposal, remember that the Duggars aren't even allowed to kiss until their wedding day, so Austin was only blindfolding Joy-Anna in order to surprise her.

But then, after leading Joy-Anna to a hill, and retrieving the engagement ring from his dad, Austin removed the blindfold, and when Joy-Anna looked at him, he was on one knee with the ring in hand. Obviously, she said yes, and the couple were married on May 26, 2017 and are now expecting their first child together.

Additionally, the couple has been the topic of a fair share of controversy, as I mentioned before. Unfortunately, that seems to be part of the territory of being a reality television star, but some of the rumors surrounding Austin and Joy-Anna are kind of ridiculous. For instance, a lot of people are convinced that Joy-Anna is further along in her pregnancy than she's leading on, meaning that she and Austin had sex before their wedding day. Now, while this wouldn't really be a big deal for most couples, for a family that prides itself on modesty and abstinence, these rumors have definitely has made a splash amongst their fans.

But, there's really no hard evidence to prove that these rumors are true, other than people noticing that Joy-Anna "looks" to be further along than she claims, which is really just a form of body-shaming. Additionally, Austin and Joy-Anna totally addressed the scandal that they had hugged before they were engaged, with Austin saying, "We’re humans and sometimes we don’t always abide perfectly by our rules," he said, according to People. "We try. That was a real hard try."

At the end of the day, Austin and Joy-Anna are only 24 and 20 years old, respectively and they're still learning to navigate this thing called life (with cameras following them around). Really, they had a perfectly innocent proposal, and lovely engagement, and a beautiful wedding. And now, they can prepare to welcome that beautiful child into the world.