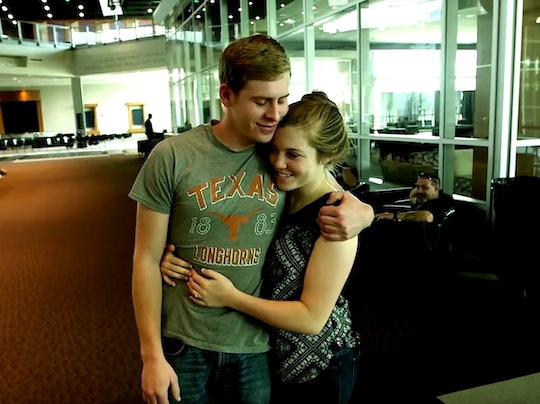 A lot can be said about the Duggar family and the 19 siblings that comprise the famous family and stars of TLC's 19 Kids and Counting from Arkansas. But what the family members say themselves as well as their loved ones is just as important as what people have said about them. That's why fans should read Joy-Anna Duggar's quotes about her husband, Austin Forsyth as they anticipate the birth of their first child. Much of what she's said about the father-to-be in the public eye is super adorable and shows just how much she loves him.

The couple is so in love and it could not be any more clear. After being engaged for three months prior, according to People, the couple married in May in front of their closest friends and (multiple) family members — and TLC's cameras were there to capture it the whole time. It's a good thing that those cameras were rolling because the things that Joy-Anna has said about her husband are seriously sweet.

While Joy-Anna's TV show that she shares with her sisters, Counting On, might currently be off the air (new episodes are returning in the spring, according to TLC), Joy-Anna's quotes about her husband can fill you up with their love until Counting On finally comes back later this year.

On How She Knew He Was "The One"

The Duggars have their own set of unique rules for hanging out with members of the opposite sex. Instead of dating people, the Duggars enter courtships, where they must be chaperoned on their dates. While this isn't super traditional, it works for them. And during an episode of Counting On, Joy-Anna revealed what attracted herself to Forsyth. Joy-Anna said, according to Entertainment Tonight:

The first time I remember thinking "wow, this guy is incredible" was when he was over at our house one time and we were playing volleyball and after volleyball, my dad had Austin share his testimony. And Austin was crying and sharing all that God had done in his life and just to see his heart was the first thing that attracted me to him.

She Know's He's Capable Of Being A Great Father

After announcing to People in late August that they were expecting their first child in 2018, Joy-Anna gushed to the magazine about her husband and assured her confidence in his ability to parent. Joy-Anna said, according to People:

I'm looking forward to watching Austin as a dad and raising children together with him.

At their young ages, Joy-Anna will certainly have plenty of time to watch Austin be a parent and will definitely have the time to raise many more children together.

On His Abilities To Please Her

Indeed, the Duggars' traditions are unique. For example, they can't kiss their fiancé until they're officially married. So, it was no surprise that their was a lot of build up to wedding ceremony on the day of Joy-Anna and Austin's wedding day. But, according to Joy-Anna's testimony on Counting On, Austin did a pretty good job with the kissing — and that is a major part of any relationship. Joy-Anna said, according to the Daily Mail:

Austin and I's first kiss was amazing. He did a good job — he put his hand up to my face just in case he missed and nobody could see. It felt very natural. Throughout our relationship, it's been "OK, this is the next step, this is what we need to do next," and that was the way it was with our first kiss.

On What She Loves About Him

You can tell that Joy-Anna loves Austin so much, just by looking at photos of them together. But Joy-Anna has also been vocal about what makes her love him. During an October episode of Counting On, shortly before they got married, Joy-Anna revealed all of the little things that make her love "her best friend." Joy-Anna said, according to Hollywood Life:

I love that he balances me out in so many ways. He has a very adventurous spirit, which pulls me out of my box a little bit.

Just from these quotes you can tell that Joy-Anna is so head over heels for her husband — and their love will carry them as they welcome their first child together in 2018.