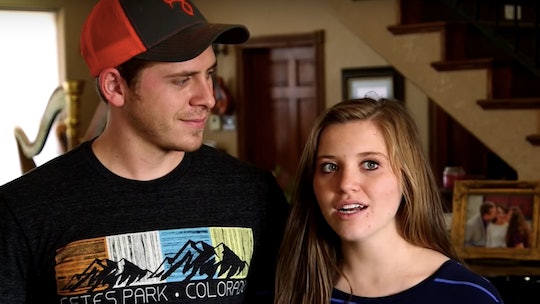 Can you believe it? Joy-Anna and Austin Forsyth welcomed their first child nearly a month ago already. It was only recently, though, that Counting On fans got to see the big event unfold for themselves. Going into Monday's extra-long special, viewers already knew Joy-Anna had successfully delivered a baby boy. Still, not very many details surrounding the birth had previously been released. (And the suspense was killing fans!) As it turns out, the young mom had originally planned on delivering at home, but when her midwife determined the baby was breech, the new mom — who had already been in labor for 20 hours at that point — was rushed to a hospital for an emergency C-section. Since giving birth, Joy-Anna and Austin have remained relatively quiet as they adjust to new parenthood. However, Joy-Anna Duggar's latest update on being a mom to baby Gideon is so sweet, and all parents will definitely relate to how she's feeling right now.

Little Gideon made his grand entrance on Feb. 23, according to E! News. (Weighing in at 10 pounds, 3 ounces and 22 inches long, I guess he technically wasn't that "little," after all.) Just a few days after their son's birth, Joy-Anna and Austin released a video on TLC's website about how the new parents are adjusting to life with a newborn.

"The first few days have been really good. Gideon, he likes to eat a lot," the gushing new mom said in the TLC video. She added:

Now that baby Gideon is closing in on his 1-month "birthday," Joy-Anna recently opened up about her life as a new mom in an interview with Us Weekly. And honestly, I'm guessing most parents can relate to this sentiment:

Before Gideon was born, I didn’t know how adjusting to motherhood would be like. But now that he’s here, I really can’t imagine life without him.

Awww! I know I felt the same exact way after giving birth to my first child. It's amazing how quickly it all changes, isn't it? After just a few weeks, it's difficult to remember your life and the person you once were before motherhood. Because as they say, "A baby changes everything."

From the sound of it, it seems like new dad Austin has been pulling his weight when it comes to baby care. Which, for a presumably breastfeeding mom — Joy-Anna's mom, Michelle Duggar, and sisters have all breastfed, People and Us Weekly reported, respectively — this is good news. (You know, since dads generally aren't the lactating ones.) “Austin’s been helping me with waking up in the middle of the night, changing the baby’s diaper, any getting the baby for me," Joy-Anna told Us Weekly, adding:

Our relationship has grown even closer. We’re working as a team and this is just another thing that we do as a team.

Considering Joy-Anna is the ninth-oldest of 19 children — and has put in her fair share of babysitting younger siblings through the years, as evident by her appearances in 19 Kids & Counting — you'd think that there isn't much the 20-year-old hasn't witnessed when it comes to babies. However, even with a continuous stream of infants in the house, its seems Joy-Anna has discovered that having your own child is a completely different ballgame. Because it's one thing to help keep an eye on siblings and maybe even change an occasional diaper. It's an entirely different experience to carry the burden of nurturing another child physically and emotionally — for life.

I'll leave you with one more ultra-relatable, new-mom quote from Joy-Anna, according to Us Weekly: “He is growing and changing so much every day." (Amen, sister!) Watching your tiny (or in Joy-Anna's case, not-so-tiny) baby go from a wrinkly, squishy newborn who sleeps most of the day, to a suddenly-awake baby, to smiling, to rolling over, to sitting up, crawling, and walking — all in the span of a year — is a truly magical experience. You're in for a wild ride!