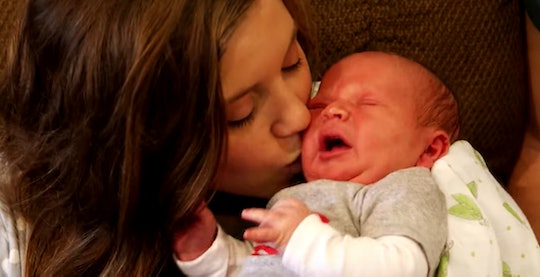 When you grow up in a family of 19 children, it only makes sense that you'd wind up learning a thing or two about caring for babies. Because for more than two decades, there's pretty much always an infant in the house. This is good news for the adult children of Michelle and Jim Bob Duggar, as many of them are getting married and starting families of their own. In fact, within a span of only five months, three different Duggar siblings announced they were expecting their first child: Joy-Anna and Austin Forsyth in August, Joseph and Kendra Duggar in December, and Jinger and Jeremy Vuolo in January. (It was a full-on Duggar baby boom!) The most recent of these couples to become parents are the Forsyths, and Joy-Anna's updates on baby Gideon so far show she's got a good handle on motherhood.

As In Touch Weekly reported, Joy-Anna, 20, and Austin, 24, welcomed little Gideon on Feb. 23 via emergency C-section when their original plan for a home birth took a scary turn. After 20 hours of labor, a midwife determined the baby was breech, which resulted in admitting the laboring mom to a nearby hospital. Thankfully, baby Gideon was born healthy — weighing in at a whopping 10 pounds, 3 ounces, no less.

Since then, Joy-Anna has offered several glimpses into her life as a new mom, starting with a TLC video introducing her son to the world. Like many newborns during those early days, sleeping at nighttime wasn't one of Gideon's fortes, the new mom explained.

Both Austin and Joy-Anna predicted their first child would be a boy, and apparently this is something the new father is thrilled about — especially when their son gets older. "I think Austin's really excited to have a baby boy because he's been wanting to have someone to take to work and to go do a lot of different hobbies and to teach him all the skills that Austin knows," Joy-Anna said in the TLD video, The Hollywood Gossip reported. "And I'm excited because, I don't know, he's just our baby." Take a look at the couple's adorable (and not-so-little) baby boy in the video, below.

In fact, it seems Joy-Anna is over the moon about her new role as a mom— and that feeling is difficult to describe unless you've been there yourself.

I think being first-time parents is really indescribable. I think everybody that has a baby goes through this feeling of just being so proud and so thankful to have a little one. It's a lot of responsibility ... But it's amazing. I can't describe it.

If you remember, it was back in August that the Forsyths revealed Joy-Anna was pregnant, People reported. They shared their happy news with an adorable "eating for two" photo on Instagram, as well as a TLC announcement video. "Before we even were married, we were praying that God would give us kids, and we're so thankful that he has," Joy-Anna said in the video.

Since Gideon's birth, the couple has continued to share special moments with their Instagram followers. Like this sweet shot marking Gideon's turning 1 month old. "Time sure does fly! It’s hard to believe Gideon is already 1 month old!" the Forsyths captioned the photo. Amen! Because as been-there-done-that parents know all too well, those first few sleep-deprived months are often a blur. (And I can attest that the years only continue to fly by after that.)

Most recently, Joy-Anna and Austin shared a few shots of their family of three "getting some work done at camp" for an upcoming marriage retreat. They look like seasoned pros already.

I have no doubt that Joy-Anna and Austin will continue to update fans on their journey — both on Counting On and via Instagram. And based on what I've seen/read so far, growing up with 18 siblings seems to have at least one advantage: Confidence when it comes to babies. Because although she's still a newbie at this whole mom business, Joy-Anna already seems to have a good handle at motherhood.