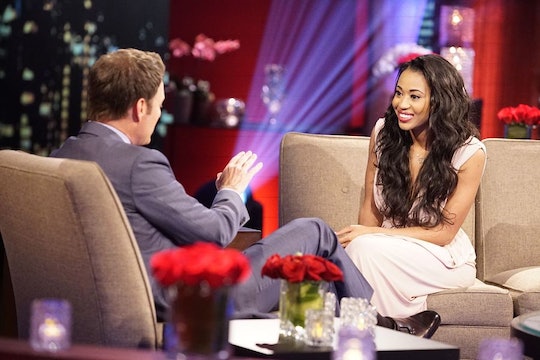 Well, The Bachelor: The Women Tell All didn't waste any time getting into the heavy conversation, did they? The Bachelor isn't known for diversity in its casting, so when Jubilee made it past the first few eliminations, we had high hopes for the war veteran. Unfortunately, in this week's "Women Tell All" special, she received some harsh criticism from her mixed race cast members. According to them, Jubilee made some racial comments while on The Bachelor that might speak to why she was verbally attacked while on the show.

"I can speak for me and some other people who are biracial," said Jami, referring to herself and Amber, "You had said on numerous occasions, 'I'm here, I'm the real black girl. I'm going to make it the farthest for a full black woman.'"

"I never said that," Jubilee shot back. "I may have said I was bringing some diversity, but I would never say that I'm the real black girl."

It came out later that Jubilee was compared to Olivia Pope early on in the house, which irked her, and Jami said she felt offended that Jubilee kept bringing up that she was the "full black girl."

"Hearing the N-word, or hearing things like 'You're not black enough' — that hurt," added Amber. "And that's why I was like, standoffish to you a little bit."

Chris gave the floor back to Jubilee, and at first, she denied the accusation, saying, "I feel very attacked just now. I'm not claiming the 'black person' and the 'I'm gonna be the person who makes it the furthest out of the black people' — no, I'm not claiming that."

But after a tearful commercial break, Jubilee backtracked and admitted that she did position herself — proudly — as the "full black girl" during her time in the house. She said she didn't think it should be offensive, but Amber and Jami clearly felt their identities were being dismissed.

One can only imagine that the "soccer mom" comment Lauren H. made in the house is just the tip of the iceberg in terms of the micro-agressions Jubilee, Amber, and Jami were likely fielding constantly on the show, from both the other contestants in the house and via comments made by Bachelor Nation. Jubilee faced unique challenges as a black woman competing on The Bachelor. Jami and Amber faced unique challenges as mixed race black women competing on The Bachelor. It's unfortunate that any of the contestants felt they had to be responsible for representing an entire race, and thus that the issue of who was "the realest" or most authentic black woman had to become a contest.

These women deserved better, but by being on the show, they made it a better experience for viewers and the other contestants. If they hadn't participated, this conversation wouldn't have happened. A bunch of white girls making awkwardly racist comments about how Jubilee isn't a suitable soccer mom wouldn't have gotten to see how divisively women of color are forced to treat each other because of the show's erasure of them. Jubilee, Jami, and Amber's altercation forced this issue to be discussed in a very direct, emotional, public way, which might be more valuable to the Bachelor franchise and this season's contestants than any time spent with Ben.

It totally sucks that Jubilee, Jami, and Amber were robbed of their own nuanced, romantic Bachelor experience and forced to fall on the diversity sword in the name of educating the rest of us on representation. They shouldn't have to be forced into the position just because they're Bachelor contestants who happen to be black. But we're grateful that they took up the issue anyway.